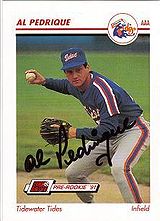 He was a coach for the 1998 New Orleans Zephyrs. He served as an Arizona Diamondbacks coach in 2004 before being promoted to interim manager in mid-season. The D-Backs were having an awful season when he was named to the job, and did not improve at all under his leadership. After the 2004 season, he joined the Houston Astros organization and worked in the team's front office as a special assistant to the general manager. He was the director of Latin American operations in 2007. In 2009 he became the Astros' minor league field coordinator. Pedrique was a coach for the Astros from 2010-2012, then returned to the minors as manager of the Charleston RiverDogs in 2013. He had significant success with the Scranton/Wilkes-Barre RailRiders, the AAA affiliate of the New York Yankees, in 2016 and 2017, leading them to the Triple-A Baseball National Championship the first year and the league finals the second.

His uncle Obdulio Pedrique played for the Venezuelan national team and later managed in Venezuela.