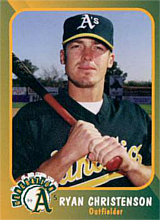 Ryan Christenson was a bit player for the Oakland A's between 1998 and 2000, routinely playing more than 100 games and gradually phasing into a defensive replacement. He split the ensuing three seasons with four different teams, finishing his career batting .222 in 452 games. In 2013, he returned to the A's organization as a minor league manager, working his way up each the ladder of the chain until joining the big league coaching staff prior to the 2018 season.