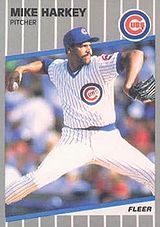 Mike Harkey was a well-regarded pitcher with a weak shoulder. He was signed as a 1st round pick in the 1987 amateur draft by the Chicago Cubs and scout Gene Handley.

In 1990, with the Cubs 13 games under .500 at the All-Star break, manager Don Zimmer decided to install a four-man rotation. Though it helped in the short run, as the team ended up making a (futile) charge at .500, and though Harkey pitched well for a while, he broke down and was never very good again. This is not to say Zimmer deserves the blame for what happened to Harkey, as he was a weak-armed pitcher, but this didn't help matters much. He went 12-6, 3.26 in 27 starts that year, pitching a career-high 173 2/3 innings in what turned out to be his best big league season.

He spent 2006 with the Florida Marlins as bullpen coach under manager Joe Girardi, a former teammate with the Cubs, and was the Iowa Cubs's pitching coach in 2007. In 2008, Girardi picked him to be his bullpen coach with the New York Yankees, a position he occupied until 2013. In 2014, he became a major league pitching coach for the first time, with the Arizona Diamondbacks and stayed on for the 2015 season. In 2016, he returned to the Yankees as bullpen coach.