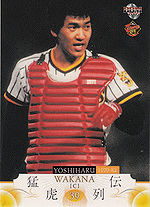 Wakana hit .303/.354/.404 in a fine first year with Hanshin in 1979. He had a couple rough instances; on May 29, he set up a NPB record with five strikeouts in a game. On the year, he had 17 passed balls, a new Central League record. Despite these fielding lapses, he still won a Diamond Glove Award for the only time, as the top defensive catcher in the circuit. He finished 10th in the CL in batting average. He also made his second All-Star team.

Wakana batted .213/.257/.289 in 73 games in 1982, made his fifth All-Star roster. During the season, though, it became public that Wakana was having an affair with actress Kazuko Shirakawa; he promptly resigned amidst the scandal.

After retiring as a player, Yoshiharu coached for the Daiei Hawks from 1997 through 2001. During coaching days, he instructed and raised young catchers, especially Kenji Johjima. Late in his final year as battery coach, he was involved in one of Japan's major controversies. Tuffy Rhodes, chasing Daiei manager Sadaharu Oh's NPB record of 55 home runs, came to play against Daiei. The Hawks offered Rhodes few pitches; in one game, they threw him 16 balls in 18 pitches. Oh received much of the blame in the media, while Wakana said he was the one who ordered the club to pitch around Rhodes, saying "I didn't want a foreigner to break the record."