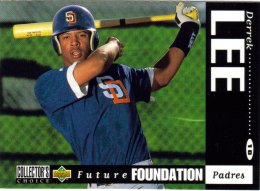 Derrek Lee played fifteen years in the majors. He played in one World Series, was named to two All-Star teams and won three Gold Gloves for his play at first base. In his best year, 2005, he led the National League in hits, doubles, batting average, slugging and OPS+.

He is the son of Leon Lee and the nephew of Leron Lee, both players famous for their success in Japan.

He was traded to the Chicago Cubs on November 25, 2003 for Hee-Seop Choi, another young first baseman who failed to blossom with the Florida Marlins.

In 2005, he had a great year with the bat, hitting for a career-high .335 batting average, which was tops in the National League, and slugging 46 home runs. Unfortunately, he broke a hand early in the 2006 season and was set back considerably, although he returned to being an excellent hitter.

None of the most-similar players to Lee (by the similarity scores method) are in the Hall of Fame but include very good players like Fred Lynn, Reggie Smith and Will Clark.

He is a huge fan of the rap group Arrested Development. His nickname is "D-Lee".