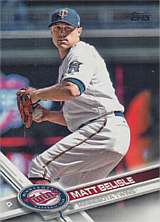 Matt Belisle was drafted by the Atlanta Braves in the 2nd round of the 1998 amateur draft. He was signed by scout Charlie Smith and made his pro debut the next summer. Belisle debuted with the Cincinnati Reds in 2003 and hung around for fifteen seasons, settling into a middle relief role upon his move to the Colorado Rockies as a free agent before the [2009 Rockies|2009]] season. Matt's 80 appearances paced the senior circuit in 2012, when he was 3-8, 3.71, with 3 saves and 69 strikeouts in 80 innings. After logging a personal best 9 saves with the 2017 Minnesota Twins, he split his final season between the Twinkies and Cleveland Indians in 2018.