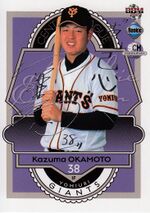 Kazuma Okamoto has been an All-Star slugger in Nippon Pro Baseball.

Okamoto played for Japan in the 2014 Asian Junior Championship, his team finishing second. [1] The Yomiuri Giants took him in the first round of the 2014 NPB draft. [2] He hit .258/.307/.354 in the minor Eastern League that season (5th in the EL with 18 doubles) and was 6 for 28 with a homer and two walks with the big club. His first Central League at-bat came as a pinch-hitter for Hayato Takagi in late August; he was retired by Daisuke Sobue. [3] His first hit was a two-run pinch-hit homer, again batting for Takagi, off Yoshiki Sunada. [4] He fielded 23 chances error-free for the Giants, backing up Shuichi Murata at third base.

Okamoto replaced long-time star Shinnosuke Abe at first base in 2018, as Abe was fading at age 39; Okamoto also played a fair bit of time at third or in the outfield when Abe was at first. He responded to the playing time very well, producing at a .309/.394/.541 clip with 82 runs, 26 doubles, 33 homers, 100 RBI and 72 walks. He was the youngest player in NPB history to drive in 100 runs and was the 4th Giant to hit 30+ homers the year they turned 22 (joining legends Sadaharu Oh, Hideki Matsui and Hayato Sakamoto). [6] He was the starting first baseman for the CL in 2018 NPB All-Star Game 1, hitting 8th. He grounded out against Yusei Kikuchi, Mike Bolsinger and Yuito Mori then whiffed against Hirotoshi Masui. [7] In Game 2, he replaced Tomotaka Sakaguchi in the field and Nori Aoki in the lineup. He struck out against Naoyuki Uwasawa then Kosuke Tanaka batted for him. [8] He finished the season among the CL leaders in home runs (6th, between Tetsuto Yamada and Seiya Suzuki), RBI (2nd, 31 behind Wladimir Balentien), slugging (7th, between Dayán Viciedo and Sakamoto) and OPS (8th, between Sakamoto and Balentien). He was 7th in voting for the 2018 CL MVP, between Viciedo and Shota Nakazaki. [9] He played for Japan in the 2018 Nichi-Bei Series; his homer off Junior Guerra was the only run Guerra allowed in five innings in the game in which Japan clinched the series. [10]