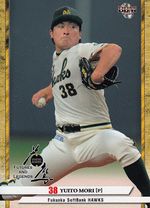 Mori played for Mitsubishi Jidosha Kurashiki Oceans in the industrial leagues after high school. He was picked by the Softbank Hawks in the second round of the 2013 NPB draft, one round after Ren Kajiya; he was not the first Mori taken as Tomoya Mori went in the first round. [1] He saw regular action as a rookie in 2014. He debuted May 11, relieving Akihiro Yanase to close out a 7-1 win over the Seibu Lions, retiring Shogo Akiyama to end it. [2] His first strikeout victim was Hikaru Ito. [3] For the season, he was 4-1 with a 2.33 ERA and 0.94 WHIP in 58 games. He was two games shy of making the Pacific League top 10; Randy Williams was 10th at 60. He got 31 votes for the 2014 Pacific League Rookie of the Year Award, finishing 3rd behind Ayumu Ishikawa (155) and Tomoni Takahashi (46). [4] The rookie was turned to in key situations in the 2014 Japan Series, tossing three shutout innings including a scoreless 7th in the clincher as the Hawks beat the Hanshin Tigers in five games. Only Ryota Igarashi and Dennis Sarfate pitched more for the Hawks in the Series. [5]

He made his first PL All-Star team the next year. In 2015 NPB All-Star Game 1, he relieved Hideaki Wakui in the 7th with a 7-4 deficit and was the first PL hurler to hold the Central League scoreless that day. He retired Tsubasa Aizawa but gave up hits to Shinnosuke Abe and José López before fanning Takahiro Arai; one of the baserunners must have been eliminated at some point as that ended the inning. Naoki Miyanishi took over. [6] He had no sophomore slump at 5-2, 2.69 for the Hawks in 2015. He also threw two shutout innings in the 2015 Japan Series as the Hawks defended their title, beating the Yakult Swallows. Only Sarfate (3 games) worked more than his two outings for Softbank. [7]

When Sarfate had a hip injury that sidelined him for most of 2018, Mori stepped in as closer. He also pitched in both 2018 NPB All-Star Games, the only hurler to do so. In Game 1, he relieved Miyanishi in the 7th with a 5-2 deficit. He retired Kazuma Okamoto, gave up a single to Aizawa then retired both Tetsuto Yamada and Tomotaka Sakaguchi. Tatsuya Uchi relieved him. [9] In Game 2, he relieved Kajiya in the 9th with a 5-1 lead and went 1-2-3 against Yamada, Seiya Suzuki and Ryosuke Hirata (a game-ending K). [10] He was 2-4 with 37 saves and a 2.79 ERA in 66 outings in the regular season. He was 5th in the PL in games pitched (between Kayama and Katsunori Hirai) and 1st in saves (two ahead of Hirotoshi Masui. In a 7-game winning streak by the Hawks late in the year, he saved every single game, breaking the NPB record of six shared by Masahide Kobayashi, Hitoki Iwase, Kyuji Fujikawa, Koji Aoyama), Wakui and Seung-hwan Oh. [11] He got one third-place vote for the 2018 Pacific League Most Valuable Player Award. [12] He pitched in five of six games in the 2018 Japan Series as Softbank beat the Hiroshima Carp to give him four titles in his first five years as a player. He pitched 5 1/3 shutout innings over his five outings (tying Kayama and Shota Takeda for the team lead in games pitched in the Series). He saved Ariel Miranda's game 3 win, escaping a self-imposed jam when he gave up hits to Suzuki and Xavier Batista in the 9th. In game 4, he saved a win for Nao Higashihama. In game 5, he pitched a scoreless 9th before Kajiya won it in extra innings. In game 6, he got another save to end the Series, wrapping up a combined shutout started by Rick van den Hurk and continued by Takeda and Kayama. [13] While teammate Takuya Kai won the Series MVP, Mori was named one of three Outstanding Players alongside Yuki Yanagita and Akira Nakamura. [14] He now had a 0.68 ERA in 14 Japan Series outings.