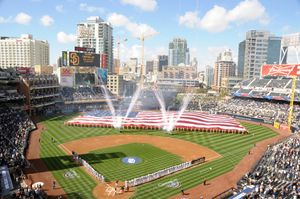 The 2014 San Diego Padres started the season on the right foot, after being designated to host Major League Baseball's official stateside Opening Day with a nationally-televised Sunday night game against the Los Angeles Dodgers on March 30th. First, they set an attendance record for Petco Park by drawing 45,567 fans, and then they staged a dramatic comeback to win the game 3-1. After being held scoreless by Dodgers starter Hyun-Jin Ryu for 7 innings, pinch-hitter Seth Smith, acquired in a trade during the off-season, led off the bottom of the 8th with a homer off reliever Brian Wilson; Yasmani Grandal then drew a walk, also in a pinch-hitting role and advanced to second when Wilson mishandled Everth Cabrera's sacrifice bunt for an error. With Chris Denorfia also squaring off to bunt, Grandal surprised everyone by stealing third base, taking advantage of 3B Juan Uribe charging towards the plate, for the first stolen base of his professional career. Cabrera followed suit by taking second and Denorfia lined a two-run single for the win. The game was played in tribute to beloved long-time broadcaster Jerry Coleman, who had passed away at the age of 89 during the winter. The team wore a shoulder patch with his initials all season, and played on opening with camouflage uniforms, in honor of Coleman's status as a combat veteran of both World War II and the Korean War.

With the Padres' record at 32-43 and the team 12 1/2 games out of first place on June 22nd, they fired General Manager Josh Byrnes. The team had failed to play for .500 since his appointment following the 2011 season. Omar Minaya took over on an interim basis while the search for a replacement went on, concluding with the hiring of A.J. Preller on August 6th. The Padres went only 10-17 in June and as a team had a batting average of .171, the lowest monthly average by any team in the live ball era. Twice during the month, they won a game while collecting only a single hit: on June 4th, they beat the Pittsburgh Pirates, 3-2, with the only hit a 1st-inning bunt single by Everth Cabrera, then on June 30th, they managed only a Tommy Medica single in defeating the Cincinnati Reds, 1-0. They were the first team to win two games with only one hit in a season since the 1965 Los Angeles Dodgers.

When the trading deadline rolled around, the Padres traded away some veteran players, even though a new GM had not yet been appointed. Closer Huston Street, 3B Chase Headley and OF Chris Denorfia all left in return for younger players, none of them top prospects however. The Padres also lost CF Cameron Maybin when he was suspended for 50 games for violating Major League Baseball's drug program. Amid the gloom, there were some small rays of hope, particularly rookie pitcher Jesse Hahn who won 7 of his first 9 starts in the majors with an ERA of 2.01. Another rookie pitcher, Cuban defector Odrisamer Despaigne also showed flashed of brilliance in his first few starts in the Show, coming within four outs of the first no-hitter in franchise history on July 10th. There was little hope on the hitting side, however, as the Padres were dead last in the majors, and by a wide margin, in both runs scored and OPS at the end of July. However, the team played a lot better during the last two months of the year, finishing with a respectable record of 77-85, and moving ahead of both the Colorado Rockies and Arizona Diamondbacks to finish a distant third in the NL West. It was unclear however, how much of this improvement was real, and how much was simply a function of the weakness of their competition.