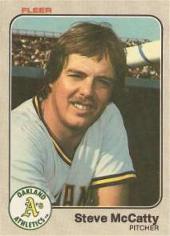 Steve McCatty spent his entire nine-year major league career pitching for just one team, the Oakland Athletics. He won an ERA championship as a result of a famous technical issue. McCatty and Sammy Stewart were the two pitchers involved in the "rounded-off ERA" controversy at the end of the 1981 season. The two major leagues, at the end of each season, used to round off innings pitched to the nearest inning, a practice dating back to the days before calculators, until that turned out to alter the outcome of the 1981 championship for the lowest ERA. He also player nine years in the minors.

In 1989, Steve McCatty played for the Fort Myers Sun Sox of the Senior Professional Baseball Association. He went 5-6 for the club. In 1990, McCatty was 1-2 with a 4.71 ERA for the Sun Sox when the league folded.