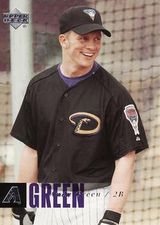 Andy Green was a consistent .300 hitter in the minor leagues, won a Pacific Coast League MVP award, and played in the majors for three years with the Arizona Diamondbacks. After a year with the Nippon Ham Fighters in Japan, he played in the Cincinnati Reds organization and returned to the major leagues for a brief time in 2009 with the New York Mets.

In 2002, Andy hit .222/.294/.333 in a 27-game glance at AAA with the Tucson Sidewinders but spent most of the year in high class A, where the 24/25-year-old batted .309/.401/.464 with the Lancaster JetHawks. He drove 36 doubles and had 15 steals but was thrown out 10 times. His 44 doubles between the two teams put him 5th in the minor leagues that year. He was three doubles away from the California League lead and was 5th in the league in batting average. On August 21, he hit for the cycle, going 4 for 5 with a 9th-inning homer to seal the deal; it was one of just six home runs he clubbed that year for Lancaster.

Green had his third .300 stop in 2003 with the El Paso Diablos, posting a .302/.366/.400 line, doubling 38 times (only four other extra-base hits) and stealing 17 in 26 tries. He tied Justin Leone for the Texas League lead in doubles and was third in average, trailing Ramon Nivar and Jake Weber.

Andy returned to Tucson in 2004 and hit .327/.394/.534 with 31 doubles in 77 games. That earned him a call-up to the Diamondbacks, where he only managed a .202/.241/.266 line in 46 games as a backup infielder. His first big-league hit was a pinch-hit homer against Jose Contreras. Green had his biggest minor league season in 2005. He batted .343/.422/.587 with the Sidewinders with 46 doubles, 13 triples, 19 homers and 125 runs in 135 games while rapping 182 hits. In addition to second, he played third, short and the outfield. He led the Pacific Coast League in runs, hits, total bases (311), doubles and triples and was 6th in average. He reached base in 54 consecutive games at one point and almost doubled his career home run total. He tied for 8th in the minors in average, scored 11 more runs than any other minor league that year, was second in the minors in hits, second in total bases, tied for third in doubles and second in extra-base hits. Baseball America named him a second-team minor league All-Star behind Howie Kendrick among second basemen on the farm and the top 2B in AAA. He was named to the PCL All-Star team at second base and won the league MVP award.

Green won the final spot on the 2006 Diamondbacks roster but was rarely used, hitting .186/.293/.267 as a backup infielder and in the difficult role of pinch-hitting (though he batted .234/.345/.362 in 56 pinch-hit games). He only got nine starts during the year. He also briefly appeared with Tucson in a rehab stint, batting only .240/.288/.320 in 18 games there. That year, he was honored by the Kentucky State legislature, which proclaimed him an "outstanding citizen of the Commonwealth and an exemplary role model for the young student athletes in the Bluegrass State."

After the 2006 season ended, Andy began a long series of negotiations with the Hokkaido Nippon-Ham Fighters, who had just won the 2006 Japan Series but had lost star Michihiro Ogasawara to free agency and popular outfielder Tsuyoshi Shinjo to retirement. In late November, Arizona sold Green's rights to Nippon Ham, which signed him for a $50,000 bonus and $660,000 salary for 2007. There was an option for Nippon Ham for 2008 for $850,000 with a $100,000 buyout clause.

Green battled injuries and spent much of his Japanese team in ni-gun. He was placed on waivers in late August.

Late in 2007, Green was signed by the Cincinnati Reds. He began the 2008 season with the Louisville Bats, where he hit .233 in 71 games. He was released on July 1, then was picked up by the New York Mets organization, where he suddenly started hitting very well. He batted .331 with 8 hrs (13 on the season) in 52 games with the New Orleans Zephyrs of the PCL to give the Mets a reason to keep him for another year. He returned to the major leagues for 4 games with the Mets in 2009, going 1 for 4. That may not sound like much, but it pushed his lifetime major league batting average above the Mendoza line. He spent most of the season with theBuffalo Bisons of the International League, hitting .259 in 50 games. He spent the majority of the season on the disabled list and had rehabilitation assignments with the GCL Mets and the Brooklyn Cyclones of the New York-Penn League.

In 2011, Green became a coach for the Missoula Osprey then was manager of the AZL Diamondbacks later in the year. In 2012 he returned to Missoula as manager. In 2015, he moved to the major league Arizona Diamondbacks as third base coach. On October 29th, the San Diego Padres appointed him as their manager for the 2016 season, succeeding Pat Murphy. He had a rough debut as a major league skipper, as under his watch, the Padres became the first team in major league history to lose its first three games, all by shutout as they were swept by the Los Angeles Dodgers. The Padres finished last in the National League that season, but that was expected of a rebuilding team. On August 13, 2017, the Padres announced that they were extending Green's contract for three more seasons, a sign that they were satisfied with his work of bringing up young players and helping them become productive major leaguers, in spite of the low number of wins. However there was no visible improvement in 2018 but by 2019 the Padres had assembled a load of talented young players ready to break out who were the envy of other major league teams. They also signed 3B Manny Machado to a huge contract, joining the previous year's signing, 1B Eric Hosmer. The Padres started off strong and were 45-45 at the All-Star break, but tailed badly in the second half and on September 22nd, Green paid the price, being fired with only eight games left to play in the season. The Padres were certain to have another losing record, as they were 69-85 at that point, their improvement being nowhere near what had been expected. Bench coach Rod Barajas took over as interim manager.

In 2020, he joined the Chicago Cubs to become the bench coach under newly appointed manager David Ross.