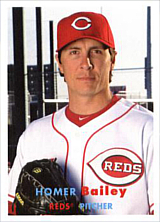 Pitcher Homer Bailey was a top pitching prospect for years before reaching the majors in 2007. He has thrown two no-hitters in his career.

Bailey beat Forney High School in the Class 3-A Texas high school championship as a freshman. Three years later, he did it again to complete a season in which he was 15-0 with a 0.68 ERA. In 93 innings, he struck out 201 and walked 19 while holding opponents to a .119 average. In the finale, Bailey fanned 14 and his last pitch in the complete game was a 96 mph fastball. He also went 2 for 3 with a 2-run double in the contest. That year helped separate him from a pack of prospects to be deemed the top high school pitcher in the country by Baseball America, winning the Baseball America High School Player of the Year Award. Overall, he was 41-4 with a 0.98 ERA and 536 strikeouts in 298 innings during his prep career.

He was selected by the Cincinnati Reds in the first round (7th overall) of the 2004 amateur draft and signed by scout Mike Powers. He debuted with the GCL Reds, going 0-1 with a 4.38 ERA. His fastball was clocked at 97 mph and Baseball America rated him the 20th-best prospect among right-handed pitchers in the minors and the top Reds prospect. In 2005, Bailey led Reds farmhands with 125 strikeouts, accumulated in only 103 2/3 innings. He held opponents to a .232 average and 5 homers while finishing 8-4. He walked 62, though, so his ERA was unimpressive overall at 4.43 as many of those runners came around to score. Baseball America rated him the top Reds prospect and the 2nd overall prospect in the Midwest League, behind only Carlos Gonzalez. His 2006 helped him maintain his prospect status. He led Cincinnati minor leaguers in strikeouts (156) and opponent batting average (.198). His record was 3-5, 3.31 for the Sarasota Reds (49 hits, 79 strikeouts in 70 2/3 innings) and 7-1, 1.59 for the Chattanooga Lookouts (78 strikeouts, 1 homer in 68 innings). Baseball America rated him the best Reds prospect, the best pitching prospect in the Florida State League, the best prospect in the Southern League, the best prospect in the FSL and having the best fastball in the FSL. He was the winning pitcher in the 2006 Futures Game, allowing one run and two hits (doubles to George Kottaras and Chin-Lung Hu) in an inning of relief for Jason Hirsh.

Invited to spring training in 2007, Bailey struggled in three outings, going 0-1 with a 19.64 ERA and allowing 9 baserunners in 3 2/3 innings. Bailey began the season with the Louisville Bats, one step from the majors, and went 6-1 with a 2.31 ERA and 39 hits allowed in 58 1/3 innings. He fanned 51 and walked 24 and was second to Kevin Slowey in ERA in the International League. When Bobby Livingston was demoted, the Reds called up Bailey to join the major league staff. He made his big league debut on June 8th, starting against the Cleveland Indians and pitching 5 innings to get the win. He struggled with his control, walking four and hitting one batter while allowing five hits and striking out three. He finished the season at 4-2, 5.76 in 9 starts, then in 2008 was only 0-6, with a 7.93 ERA. He was 4-7, 4.77 with Louisville that season, and would pitch part of the next three seasons in the minor leagues as well. In 2009, he made 20 starts at the big league level, going 8-5 with 4.53 ERA. In 2010, his record was 4-3, 4.46 in 19 starts as the Reds won the NL Central title. He pitched once in relief in the NLDS against the Philadelphia Phillies, tossing two scoreless innings in Game 3 on October 10th while Cincinnati was swept in three games. As of 2019, it remains his sole relief appearance at the major league level. In 2011, he was 9-7, 4.43 in 22 starts as his 132 innings were the most in any of his big league seasons up to that point.

In 2012, Bailey spent the entire season in the majors for the first time. On September 28th, he no-hit the Pittsburgh Pirates at PNC Park, striking out 10 while walking only one; Clint Barmes also reached base on Scott Rolen's error in the 3rd inning. It was the Reds' first no-hitter since Tom Browning's perfect game in 1988, and the seventh no-hitter of the season in the major leagues, tying the modern record set in 1990 and tied in 1991. He finished the year with a record of 13-10, 3.68 in 33 starts - tied for most in the National League - throwing 208 innings and striking out 168 batters. For the first time, his numbers were in line with what was expected when he was the Reds first rounder. The Reds won the NL Central title for the second time in three years and Bailey was given the ball for Game 3 of the NLDS on October 9th against the San Francisco Giants, with the Reds already up two games to none. Homer did his job brilliantly, pitching 7 innings of one-hit ball during which he struck out 10 opponents, but he left with the score tied, 1-1 and the Giants squeezed out a 2-1 win in the 10th, then won the next two games to end Cincinnati's season.

Bailey filed for salary arbitration heading into the 2013 season, and was one of the last two players to agree on a salary, signing a one year deal for $5.35 million on February 16th. Combined with the deal reached by Clayton Richard with the San Diego Padres, it meant no arbitration filing would result in a hearing that year, a first since the creation of the arbitration process in 1974. On July 2nd, he joined the small fraternity of pitchers to have two no-hitters to their credit by throwing a no-no against the Giants. The Reds won the game, 3-0, as Bailey struck out 9 opponents. He walked only one batter, Gregor Blanco, to lead off the 7th inning; one out later, with Blanco on second base, first baseman Joey Votto made a tremendous heads up play to keep the no-hitter alive: Buster Posey hit a soft liner that bounced just in front of Votto, but on which he had no play at first base because Bailey had been late moving towards the bag; however, he saw Blanco break towards third base and gunned him down, turning Posey's potential hit into a fielder's choice. This was the first no-hitter of the season, and as Bailey had pitched the last one of 2012, he became the first pitcher since Nolan Ryan in 1975 to have thrown the two most recent no-hitters in the major leagues. He was also the third Red to have multiple no-hitters, following Johnny Vander Meer and Jim Maloney. He finished the season at 11-12, 3.49 with 199 strikeouts in 209 innings, his record not truly reflective of how well he had pitched. He did not get to pitch in the postseason, as Johnny Cueto got the nod as starter of the Wild Card Game against the Pittsburgh Pirates, a game the Reds lost.

Before the start of the 2014 season, Bailey signed a six year contract extension with the Reds worth $105 million. On June 29th, he made a bid for a third no-hitter, when he took one into the 7th inning in a game against the San Francisco Giants before surrendering a two-out single to Buster Posey. He ended up with a 4-0, three-hit complete game shutout to improve to 8-4 on the season. However, his year was shortened by elbow problems. He went 9-5, 3.71 in 23 starts, logging 145 2/3 innings, but went on the disabled list on August 16th with an elbow injury after last pitching on August 7th, and did not pitch again. On September 5th, he underwent surgery to repair a torn flexor tendon. He made only a couple of starts at the beginning of the 2015 season before going down to an injury once again in late April, this time an elbow ligament sprain that forced him to undergo Tommy John surgery. He came back at the end of 2016, when he went 2-3, 6.65 in 6 starts. Nominally healthy the next two seasons, he pitched like a shadow of his former self. In 2017, he went 6-9 with a bloated 6.43 ERA in 18 starts, then in 2018 he had one of the worst seasons by any starting pitcher in recent memory, finishing at 1-14, 6.09 in 20 starts. The Reds were in a bind, as he was still owed a minimum of $28 million, including a buyout of his final season. The Reds used him as a bargaining chip in a deal with the Los Angeles Dodgers, in which they took four major leaguers, three of whom were owed substantial salaries (outfielders Matt Kemp and Yasiel Puig and pitcher Alex Wood) plus catcher/third baseman Kyle Farmer, and forced L.A. to accept Bailey in order to land two prospects, Jeter Downs and Josiah Gray. The Dodgers had no use for Bailey and, an hour after the deal was announced, the team released him, picking up the salary due him.

On February 9, 2019, he signed a minor league contract with the Kansas City Royals and made the team out of spring training. He did not pitch that well over the first couple of months, as he was 4-5, 5.79 at the end of May, but he began to turn things around as he improved to 7-6 and lowered his ERA by almost a full run, to 4.80, by the All-Star break. On July 14th, he was acquired by the Oakland Athletics in a trade in return for minor league infielder Kevin Merrell. Homer's time out west gave him a record of 6-3 with a 4.30 ERA in 13 starts, finishing the season with a combined line of 13-9, 4.57 with 149 strikeouts in 163 1/3 innings. He became a free agent after the season and on December 31st signed a one-year deal with the Minnesota Twins for $7 million.