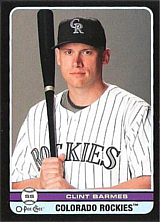 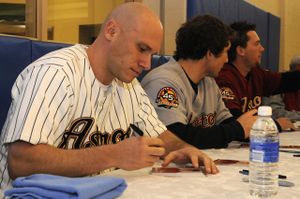 Barmes signs his autograph for a fan.

Clint Barmes played over 1,000 games in the majors. He is the nephew of Bruce Barmes.

Clint tied an Indiana State Sycamores record with a 30-game hitting streak in 2000. He led the Missouri Valley Conference with 7 triples and 146 total bases (tied with Ryan Howard, stole 20 bases and scored 63 runs. He tied for 10th in NCAA Division I in triples, made All-Conference at shortstop and was named the Conference Newcomer of the Year (he had transferred from junior college). He was drafted by the Colorado Rockies in the 10th round of the 2000 amateur draft, one round before Brad Hawpe. He was signed by scout Ty Coslow and made his pro debut that summer.

A September call-up to the majors, Clint hit 8th and played short in his debut for the 2003 Rockies. He flew out and singled against Kazuhisa Ishii and fanned versus Guillermo Mota before exiting for pinch-hitter Mark Sweeney. He had his first RBI the next day, doubling off Odalis Perez to score Garrett Atkins. For the season, he was 8 for 25 with 2 runs, 2 RBI and 2 doubles in the majors. Colorado picked up Royce Clayton to be their shortstop in 2004 and Barmes was back in Triple A. He excelled for Colorado Springs (.328/.376/.505, 42 doubles, 16 homers, 20 steals, 104 runs scored, .964 fielding percentage). He went 0 for 3 in the PCL's 4-3 loss in the 2004 AAA All-Star Game; Erick Almonte replaced him at shortstop. He was among the 2004 PCL leaders in runs scored (tied with Adam Riggs for second behind Nick Swisher), hits (175, 1st by 11 over Royce Huffman), doubles (tied with Tracy for 2nd, one behind Garrett Atkins), average (8th, between Trent Hubbard and Jason Conti). He was named the PCL All-Star shortstop. Among Rockies farmhands, he led in hits (6 more than Danny Sandoval), was second to Jeff Salazar in runs, tied for 7th in both steals and runs scored and tied Tracy for second in doubles behind Atkins. He was 6th in the affiliated minors in hits behind Erick Aybar, Brandon Moss, Jhonny Peralta, Brian Stavisky and Wilson Valdez. Baseball America ranked him the PCL's 5th best prospect that year. Colorado called him up and he hit .282/.320/.437 for the 2004 Rockies. He got his first MLB homer, off Carl Pavano, as well as his second.

As the regular shortstop for the 2006 Rockies, Barmes put up miserable offensive numbers (.220/.264/.335, 47 OPS+) while fielding .969. He tied Cory Sullivan for second in the 2006 NL with 19 sacrifice hits, one behind Roy Oswalt. His glove may have made up for his bat according to some metrics, as his Defensive Wins Above Replacement was 3.2, second to Adam Everett in the league. He only hit into two double plays, the lowest rate in the league. With uber-prospect Troy Tulowitzki up with the 2007 Rockies, Barmes was back in the minor leagues. He had three stints with the major league club (8 for 37, 3 doubles, a walk, 5 runs scored, RBI) while hitting .299/.364/.451 with 11 homers for the Sky Sox. He laid down 22 sacrifice hits, easily leading the 2007 Pacific Coast League by 10 over Val Pascucci. He was 0 for 1 with a RBI in the 2007 AAA All-Star Game before being replaced by Robert Andino; the PCL fell, 7-5. He began 2008 back on the Rockies' bench and wound up their most used second baseman; he hit .290/.322/.468 for a career-high 98 OPS+; he fielded .978 while missing some time with a right knee injury.

Colorado dealt Barmes to the Houston Astros for Felipe Paulino and he returned to being a regular major league shortstop for the first time in five years. His batting line for the 2011 Astros was .244/.312/.386; in a lower offensive environment, his OPS+ was much better at 93. He had 27 doubles and 12 home runs while fielding .978. The 12 homers were the sixth-best total for a shortstop in Astros history. He was 5th in the 2011 NL in fielding percentage at shortstop and second to Chris Young in defensive wins above replacement. A free agent, he was signed by the Pittsburgh Pirates to replace fellow light-hitting Ronny Cedeno. Pittsburgh, under manager Clint Hurdle, was bringing in some of Hurdle's former Rockies, as they also signed Rod Barajas. The two players whose surnames started with Bar both bombed at the plate, though Barmes at least provided defense. He hit .229/.272/.321 with 8 home runs, 34 runs, 45 RBI, 20 walks and no steals for a 64 OPS+. He was among the 2012 NL leaders in defensive wins above replacement (5th, between Andrelton Simmons and David Wright), third in assists at shortstop (399, between Reyes and Brandon Crawford), tied Everth Cabrera for 5th in errors at short (16) and tied Tejada for 5th in double plays at short (72).

With the 2013 Pirates, Barmes' offensive woes resulted in a decrease of playing time as Jordy Mercer was hitting much better; Barmes still saw regular time due to his sharper fielding as the two shared the position much of the year. Clint finished with 91 starts at short, hitting .211/.249/.309 for a 58 OPS+ with just 22 runs scored and 23 RBI, while fielding .968; his OPS+ was 58 to Mercer's 118. Accepting a role as Mercer's pure backup, Clint signed a one year deal to return to Pittsburgh in 2014. He only saw action in 48 games, batting a meager .245/.328/.294 (77 OPS+) while floating all over the infield. He completed his big league career after one season roaming the infield for the San Diego Padres in 2015. An attempt to catch on with the Kansas City Royals in 2016 saw him log some time with the Omaha Storm Chasers before retiring in the middle of May.