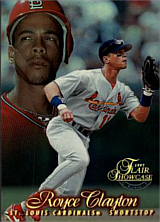 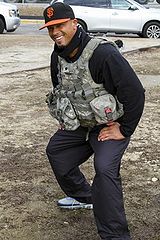 Royce Clayton was signed by the San Francisco Giants and scout George Genovese as a 1st round pick in the 1988 amateur draft after a stellar prep career at St. Bernard High School in Playa del Rey, CA. A year prior, he had hit .185/~.313/.296 for the Silver Medal-winning US team in the 1987 World Junior Championships, leading the team with six steals.

Clayton played with eleven teams over seventeen seasons, almost all of them as a regular shortstop. He spent five seasons with the Giants before moving to the St. Louis Cardinals, making his lone All-Star Game appearance in 1997. He was dealt to the Texas Rangers in 1998, nearly coming to blows with Chad Curtis during the 2000 season due to Curtis' disdain for the popular rap music Royce insisted on playing in the clubhouse. After two seasons with the Chicago White Sox, he spent his final five seasons playing for seven different teams, finishing his career with the Boston Red Sox as a particularly fascinated observer of Jacoby Ellsbury winning Americans a free taco from Taco Bell with a stolen base during the 2007 World Series. In 2,108 games, he batted .258 with 935 runs scored. He became eligible for election to the Hall of Fame in 2013 but did not receive any votes and was dropped from the ballot.

Clayton's older brother, Royal Clayton, played in the minors for several years but never made it to the major leagues despite playing in AAA for a number of seasons. Royce was once married to Olympic sprinter Samantha Davies. He became head coach at Oaks Christian School in 2017.

Clayton was portrayed by actor Jorge Sanchez in the 2002 baseball flick The Rookie, striking out against Dennis Quaid, who played Jim Morris. Years later, Royce played another All-Star shortstop, Miguel Tejada (four years his junior), in the 2011 film Moneyball.