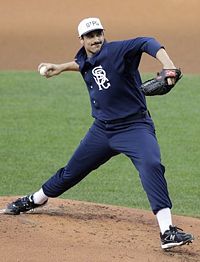 Pitcher Carl Pavano was often in the news for things other than his contributions on the baseball field. His name first popped up when he was one of two pitching prospects the Montreal Expos acquired from the Boston Red Sox when economic circumstances forced them to trade National League Cy Young Award-winner Pedro Martinez after the 1997 season (the other was Tony Armas Jr.).

His time in Montreal was marked with some success on the mound, but also a lot of injuries that meant he never pitched more than 134 2/3 innings in five seasons with the team, that total being achieved as a rookie in 1998. He was struggling along with a 3-8 record and a 6.30 ERA in 2002 when the Expos gave up on him, sending him to the Florida Marlins in a multi-player deal for Cliff Floyd on July 11th. He pitched a lot better the rest of the year (3-2, 3.79), then was very solid in 2003 as the Marlins surprised everyone by reaching the postseason. Finally healthy for a full year, he was 12-13, 4.30 during the regular season, then added a couple of wins in relief over the San Francisco Giants in the NLDS. In the NLCS win over the Chicago Cubs, he put up a solid 2.35 ERA in 7 2/3 innings, then gave up a single run in 9 innings as the Fish upset the heavily-favored New York Yankees in the 2003 World Series. He followed up that season with a career year, going 18-8 with an ERA of 3.00 while pitching 222 1/3 innings in 2004. He was named to the All-Star team that year and Baseball Prospectus gushed about him, famously proclaiming "Baseball needs more pitchers like Carl Pavano", words that would later be used by anyone who wanted to poke fun at the online publication. A free agent after the season, he signed a lucrative four-year contract with the New York Yankees.

During those days, he was tabloid fodder for a while when he dated actress Alyssa Milano. The ride down from the peak was swift for Pavano, however, as his time with the Yankees was an unabashed disaster. Continually bothered by a series of injuries, he built himself a reputation as a malingerer and a hypocondriac. When he was healthy enough to pitch, the results were unspectacular: reporters calculated that in 2005 and 2006, he made $4,250,000 per win, given his huge contract, as he went 4-6 the first year then missed the entire second season. The fact that some of his injuries were unusual - he missed considerable rehab time with a sprained butt - helped to make him the poster boy for the Yankees' foolish spending days. In spite of the time missed, he was the Yankees' opening day starter on April 2nd in 2007, as one of the team's few veterans to start the season healthy, but he was bombed in that game. He won his second start with a solid performance, but then returned to the disabled list where he stayed for the rest of the season after undergoing Tommy John surgery in June. 2008 was not much better, as he made all of 7 starts, pitching 34 1/3 innings with a 5.77 ERA, but still managed to post a 4-2 record. For the millions they spent, the Yankees got a 9-8 record and a 5.00 ERA over 26 starts over the four-year period. When the contract ended, everyone in the Big Apple sighed with relief and said good riddance.

However, after he left the media cauldron of New York, Pavano became a serviceable pitcher once again. After signing with the Cleveland Indians in January of 2009, he went 9-8, 5.37 in 21 starts, but showed enough for the Minnesota Twins to acquire him in return for a minor leaguer in early August. He went 5-4, 4.64 in 12 starts, then got to start Game 3 of the ALDS against the Yankees. He pitched well, giving up only 2 runs in 7 innings, but was charged with a 4-1 loss. In 2010, he had a very good season for the Twins, going 17-11 with a 3.75 ERA in 32 starts; he led the American League with 7 complete games and 2 shutouts while pitching 221 innings. The Twins once again faced the Yankees in the ALDS, and this time Pavano started Game 2. He gave up 4 runs in 6 innings as the Twins lost again, 5-2. Minnesota then brutally fell from contention in 2011, ending up in 5th place in the AL Central with 99 losses. As the workhorse of the pitching staff, Pavano's record reflected his teammates' struggles: he went 9-13, 4.30 in 33 starts, and led the AL with 262 hits allowed. He was back with the Twins in 2012, but the injury bug came back at age 36, after three seasons of never missing a turn on the mound. He made only 11 starts, with a record of 2-5, 6.00. His final appearance was a 7-1 loss to the Indians on June 1st, after which he was sidelined with a strained right shoulder. He was planning to return in 2013, but suffered a freak accident over the winter, falling in snow near his Vermont home and needing to have his spleen removed. As a result, he could not pitch at all that season, and sequels from the injury prevented him from working himself back into game condition before the 2014 season. At that point, he decided to call it a career.

In 14 major league seasons, he went 108-107 with a 4.39 ERA, pretty decent statistics considering how much time he missed or pitched while less than 100% healthy, or trying to come back from one of his repeated injuries.

He was originally signed by scout Buzz Bowers.