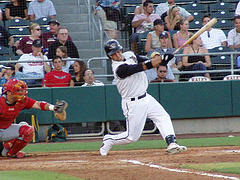 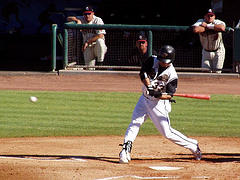 He was drafted in the first round of the 2002 amateur draft by the Oakland Athletics. He was signed by scout Rich Sparks and debuted with the Vancouver in the Northwest League for 13 games, where he hit .250/.433/.455. They then moved him to Visalia in the California League for 49 games, where his numbers were also modest: .240/.340/.399. 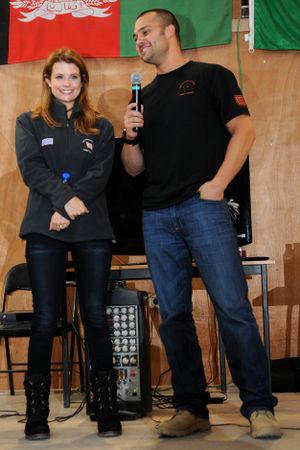 He started fast in 2006, hitting 10 home runs in April with a .738 slugging percentage. He gave new teammate Frank Thomas some credit for his fast start, but things went a little down in May, when he still slugged .551, but then in June and July, his slugging average was under .340 each month. He finished the season with 35 home runs and a .493 slugging percentage. He also drew 97 walks, for a solid .372 OBP in spite of a middling .254 batting average, and he scored over 100 runs for the first time, with 106. 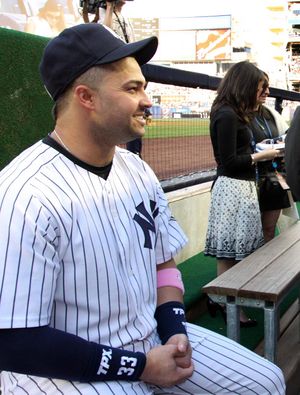 Swisher in Yankee pinstripes in 2009

In January of 2008, Swisher was dealt to the Chicago White Sox for Fautino De Los Santos, Ryan Sweeney and Gio Gonzalez. He spent one season in Chicago, falling out with manager Ozzie Guillen as he put up a poor batting average. By the time the ALDS came around, he was no longer a starter, having lost his job to journeyman Dewayne Wise. After the season, he was traded to the New York Yankees in return for infielder Wilson Betemit.

On April 13, 2009, Swisher pitched the 8th inning of a 15-5 blowout of the Yankees by the Tampa Bay Rays. Swisher pitched one inning in relief of Phil Coke. The inning consisted of a walk to B.J. Upton, a single to Willy Aybar, a strikeout of Gabe Kapler, a pop fly out to second base for Carlos Pena, and a fly out to center field by Pat Burrell. He was originally expected to share the Yankees' right field job with Xavier Nady, but Nady got hurt early in the year, while Swisher showed good power and plate discipline to claim the job full time. Still, his batting average started going down at the end of June and the Yankees acquired Eric Hinske from the Pittsburgh Pirates to give Swisher an occasional rest.

On December 23, 2012, Swisher signed a four-year free agent deal with the Cleveland Indians for $56 million. The deal was officially announced on January 3, 2013, when Swisher was introduced to the local media at a press conference. He was expected to move to first base, following other deals such as the signing of CF Michael Bourn. However, he missed the start of spring training when his mother passed away in early February, and he left his teammates to be present at the funeral in Columbus, OH. He found himself on the wrong end of two embarrassing plays in one game against the Detroit Tigers on July 8th. In the bottom of the 8th he hit a slow roller in foul territory down the third base line, and stayed next to the batter's box, convinced it was a foul ball; however, the ball dipped towards the line, and as soon as it touched the chalk, becoming fair, catcher Brayan Pena picked it up and ran full steam back to the plate to tag Nick, who had not moved. If that wasn't bad enough, he then made a comic tumble while rounding third base with two outs in the 10th inning, trying to score from second base on a single by Michael Brantley. He ended up prone on the ground and unable to score, and had to retreat back to the bag, where he could only watch as Mike Aviles struck out to end the game. He was a key figure in the Indians' late-season surge in a five-team race for the two wild card spots in the American League. On September 15th, he hit two homers in a game to lead Cleveland to a 7-1 win over the White Sox that brought the team within a half-game of the wild card. The homers were hit from both sides of the plate, the 13th time he had accomplished the feat in his career, a total that tied former teammate Mark Teixeira for most ever. He hit .246 in 145 games in the regular season, banging 27 doubles and 22 homers, scoring 74 runs and driving in 93. he then went 0 for 4 as the Indians were blanked by the Tampa Bay Rays in the Wild Card Game.

On June 19, 2014, Nick hit a walk-off grand slam with two outs in the 10th inning against Ernesto Frieri of the Los Angeles Angeles Angels of Anaheim, giving the Tribe a come-from-behind 5-3 win. It was a rare highlight in a difficult season that saw him hit only .208 in 97 games, with 8 homers and 42 RBIs. All three totals represented career lows (not counting his 20-game trial at the end of 2004) and the season ended a streak of 9 consecutive years with 20 or more homers. His year ended early when he underwent arthroscopic surgeries on both knees on August 20th. 2015 was another tough year, as injuries limited him to only 30 games with the Indians, all in May and early June. He hit .198 with 2 homers and 4 RBIs during that span, went back on the disabled list, and on August 7th was traded to the Atlanta Braves along with CF Michael Bourn in return for IF Chris Johnson. On August 22nd, he hit home runs from both sides of the plate for the 14th time, once again tying Teixeira, who had hit number 14 less than a month earlier, for the all-time record. He hit obnly .195 in 46 games for the Braves, ending the year at a combined .196 with 6 homers and 25 RBIs in 76 games. He went to spring training with the Braves in 2016, but with a rebuilding team already having a proven first baseman in Freddie Freeman, he faced a tough task making the club. On March 28th, the Braves handed him his unconditional release. He had no choice but to agree to a minor league contract in order to continue playing, and he joined the Scranton/Wilkes-Barre RailRiders, heading back to the Yankees organization. He hit .255 in 55 games, with 7 homers and 25 RBIs but was not called up to the big leagues and ended his season in July when his wife gave birth to his second child. He announced his retirement as a player after the season and in 2017 went to spring training with the Yankees as a guest instructor.

Swisher went through an elaborate ritual before each pitch while batting. He would step in and out of the batter's box, tuck his sleeve, adjust his batting helmet, look skyward, tap the plate with his bat, then set up to wait for the pitch. All the gestures were accomplished in exactly the same order. The sequence helped him to focus, and forced the pitcher to slow down, messing up his timing. While he used the full routine during his first few seasons with the Yankees, he shortened it in later years after remarks that he was unduly delaying the game with his ritual.