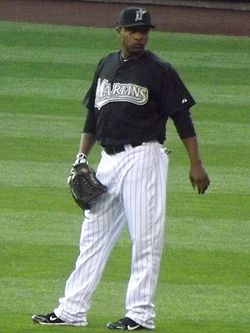 Dewayne Wise is a speedy outfielder who has spent more time as a substitute than as a starter during his major league career. He was however the starting center fielder for the Chicago White Sox during the 2008 ALDS and shined in their defeat at the hands of the Tampa Bay Rays. He hit a three-run homer in game 1, then scored the lead-off run and drove in two more in the Sox's sole win in game 3. That performance came after a mid-season call-up to the bigs, allowing him to play only 57 games. He hit .248/.293/.450 during that time, but his speed, power and defense impressed manager Ozzie Guillen enough to hand him the starting assignment in the postseason.

Wise was back to playing part-time in 2009. On July 23, he entered the game as a defensive replacement in center field for the 9th inning, with Mark Buehrle working on a perfect game for the White Sox. The first batter of the inning for the Tampa Bay Rays, Gabe Kapler, hit a long fly ball to left-center field that was destined to clear the wall. Wise timed his leap perfectly, snatched the ball above the fence, came tumbling to the ground and held on to the ball for an out that made the highlight reels across the nation. Buehrle then retired the next two batters to complete the perfecto.

In 2010, Wise moved to the Toronto Blue Jays where he continued his familiar role as a back-up outfielder. With the New York Yankees in 2012, Wise made another highlight reel catch, tumbling into the left field stands at New Yankee Stadium to catch a pop-up off the bat of the Cleveland Indians' Jack Hannahan on June 26th. He was helped out of the stands and immediately ran to the dugout, as if he had just made the inning's third out, fooling umpire Mike DiMuro. Replays showed, however, that he had dropped the ball, and that he had in fact not even recovered it, simply pumping his fist into his empty glove as if he had made the catch and then high-fiving teammate Derek Jeter; DiMuro never asked to be shown the ball, as is proper protocol, and the Yankees got away with a phantom out.Wise was used twice as a pitcher that season, fors by the Yankees against the White Sox on June 29th, when he pitched two-thirds of an inning in a 14-7 loss, and again on September 4, after he had joined the White Sox, when he went one inning in an 18-9 loss to the Minnesota Twins. He managed not to allow any runs in the two mound appearances, in spite of his only weapon being a "fastball" topping out at 76 mph.