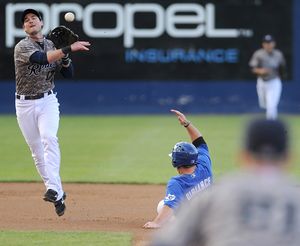 Jack Hannahan turns a double play in the 1st inning of the Tacoma Rainiers' game on May 14, 2010

"Not a lot of people are going to remember that play, but everyone in here realizes that's why we won this game." - Mark Ellis, who was able to hit a walk-off home run in the 10th inning in the game on May 7, 2008 only after Jack Hannahan's hard slide broke up a probable double play in the 8th which instead turned into a run-scoring single out that tied the game

Third baseman Jack Hannahan made his major league debut with the Detroit Tigers in 2006. In the majors, and also through his minor league career, he has drawn lots of walks. He was the starting third baseman of the Oakland Athletics in 2008, but only hit .218 with an OPS+ of 76. He started 2009 in a similar funk, hitting .193 in 52 games and was traded to the Seattle Mariners for a minor leaguer in mid-July. With Seattle, he hit .230 in 51 games while splitting his time between 3B and 1B.

On December 23, 2014, Hannahan signed a one-year contract with the LG Twins of the Korea Baseball Organization.