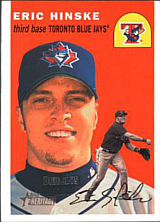 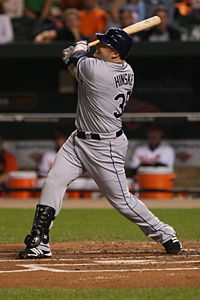 Eric Hinske played in three consecutive World Series with three different teams: the Boston Red Sox in 2007, the Tampa Bay Rays in 2008, and the New York Yankees in 2009. He only got into four games in the three Series combined, but made his limited presences count, hitting a home run, drawing a walk and scoring 2 runs in 4 plate appearances.

Hinske graduated from high school in 1995, where he lettered in baseball, basketball and football; he was also an all-state athlete in baseball. After high school, he attended the University of Arkansas, playing baseball for three seasons while studying special education. He was selected by the Chicago Cubs in the 17th round of the 1998 amateur draft.

In 1999, he played for the Single A Daytona Cubs in the Florida State League, batting .297 with 28 doubles, six triples, 19 home runs and 79 RBI. That year, he was fifth in the FSL in extra base hits (53) and total bases (229), and was selected to both the mid-season and postseason All-Star teams. Notably, he hit for the cycle on July 24 versus Fort Myers, and was 4 for 6 with two RBI. He then joined Triple A Iowa of the Pacific Coast League in September that year for four games.

In March 2001, Hinske was traded by the Cubs to the Oakland Athletics for utility infielder Miguel Cairo. Playing for Sacramento of the Pacific Coast League that year, he hit .282 in 121 games, with 25 HR, 27 doubles, 79 RBI and 20 stolen bases with a .373 OBP. In the PCL playoffs, he batted .318 in five games with one home run and three RBI. Playing for Phoenix of the Arizona Fall League, he hit .300 in 36 games with eight home runs and 28 RBI. He also played for Hermosillo in the Mexican Winter League, hitting for a .385 average with 3 HR and 7 RBI over 8 games. Hinske was on the disabled list from May 1 to 12, 2001. He was traded by the Athletics to the Toronto Blue Jays with pitcher Justin Miller for pitcher Billy Koch on December 7, 2001.

Hinske joined the Toronto Blue Jays in 2002. He had a good year, being named "Rookie of the Year" by several groups, such as the BBWAA, the Players Association, the Sporting News and the Topps baseball card company. His debut came on Opening Day (April 1st) against Boston. In that game, he picked up his first big league hit and RBI with a two-run single off Pedro Martinez. He set Blue Jay records for rookies in runs, doubles, HR, RBI and others. Notably, his 24 home runs were the most by an American League rookie since Nomar Garciaparra banged out 30 in 1997. There was some concern about his fielding after he committed a flurry of errors in the season's early going, but he settled down after a few weeks. At the All-Star break, he was hitting .273, and would hit .286 after the break. He finished the year as a part of the MLB All-Star Tour of Japan in November.

For 2005, he played in 147 games, with 100 appearances as a first baseman and 47 as a DH. The Jays had acquired Corey Koskie to play 3B in the offseason, and he shared time at the position with Shea Hillenbrand and Aaron Hill, pushing Hinske across the diamond. Eric batted a .262 with 15 HR and 68 RBI. He had a very good August, when he batted a .348 with an OBP of .413. He also had a 2 home-run game on July 19 vs. Seattle, his 5th career multi home-run game. Another big moment was his 500th career hit on August 21st while playing Detroit, a single off Sean Douglass in the 5th inning.

2006 was a year of change for the third baseman. He left Toronto on August 17th, having been traded to division rival Boston. His first game as a Red Sock was on August 18th in Game 1 of a doubleheader against the Yankees. He batted a .271 combined for Boston and Toronto that year, his best average since 2002. He made 40 appearances between the two clubs with 35 starts in right field, 16 appearances and 12 starts at first base, 10 appearances with 5 starts at third base and 6 games with 3 starts in left field. That year would be his first encounter with the outfield in the bigs, and he did not commit an error in 59 total chances there.

In his first full year as a member of the Boston Red Sox in 2007, Hinske hit .204 with 6 home runs, 12 doubles, 3 triples, 21 RBI and 25 runs. He also made his first trip to the postseason, appearing in all three rounds of the playoffs during the Red Sox's championship run. His postseason debut was in Game 3 of the ALDS, when he pinch-hit for David Ortiz in the ninth inning against the Angels. He only appeared in a total of 84 games that year, lowering most of his offensive stats.

For 2008, Hinske started the year as a non-roster invitee for spring training with the Tampa Bay Rays. Tampa was obviously impressed, as he was the club's Opening Day starter in right field and remained with the Rays the entire season. Hinske moved around the diamond quite a bit, as he made 47 starts in right field, 37 in left field, nine at first base and four at third base. He would hit .190 with two home runs and seven RBI in 18 games as the designated hitter. After Carl Crawford was put on the DL August 10th, he became the club's primary left fielder. Hinske started 32 of the 46 games in left field while Crawford was recovering, playing mostly against right-handed starters. Hinske did not appear until late in the postseason that year. He was not on the Rays' roster for the Division Series against Chicago or in the American League Championship Series against Boston, but he was activated on October 26th, prior to Game Four of the World Series, when Cliff Floyd was placed on the DL. In that game, he homered off Joe Blanton of the Phillies as a pinch hitter in the 5th inning, but he struck out the next day (on October 27) while pinch hitting in Game 5.

Hinske played for part of 2009 with the Pittsburgh Pirates, hitting .255/.373/.368 in 54 games with 106 at bats. He joined the Yankees in June for the other part of the season, hitting .226/.316/.512 in 39 games with 84 AB. Hinske was dropped from the Yankees' October roster for the first two rounds of the postseason, as they opted to go with a faster runner (Freddy Guzman) instead, but was reinstated in time for the World Series, where he once again faced the Phillies, making his third Fall Classic appearance in three years with his third different team. This time, he ended up on the right side of the ledger as the Yankees prevailed in 6 games and he drew a walk and scored a run in his only appearance.

Eric's wife's name is Kathryn, and they have one daughter named Ava, born August 8, 2007.