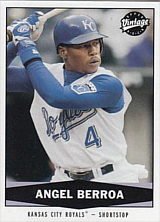 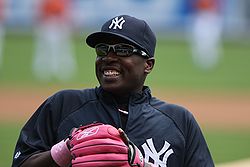 Angel Berroa had a tremendous rookie season in 2003 for the Kansas City Royals, winning the American League Rookie of the Year Award. Before the decade's conclusion, Angel's big league career would be over.

Originally signed as an amateur free agent by the Oakland Athletics, he joined the Royals as part of a blockbuster three-team trade prior to the 2001 season, a deal in which Johnny Damon, Mark Ellis and Cory Lidle went to Oakland, Ben Grieve headed to the Tampa Bay Devil Rays, and Berroa, closer Roberto Hernández and A.J. Hinch came to the Royals.

After a couple of late season looks with the Royals in both 2001 and 2002, Berroa played 158 games as the Royals' starting shortstop in 2003, collecting 163 hits (including 28 doubles, 7 triples and 17 homers), scored 92 runs and drove in 73 while stealing 21 bases. He beat out Hideki Matsui of the New York Yankees and Rocco Baldelli of the Tampa Bay Devil Rays for ROTY. Unfortunately, he never had another season as good, although he continued to play decently over the next two years. In 2004, he hit .262 with 7 homers - decent enough production, but a major disappointment for the Royals who had signed him to a long-term deal in the meantime, and they sent him down to the AA Wichita Wranglers on August 10th to work out his struggles.

In 2005, Berroa hit .308 at home on his way to a .270 average with 21 doubles, 5 triples and 11 homers. The bottom fell out in 2006, when he hit only .234 with a dreadful .259 on-base percentage in 132 games. He lost his starting job and only played 7 games in 2007, spending the rest of the year with the AAA Omaha Royals, where he hit .300. Back in Omaha to start the 2008 season, he was traded to the Los Angeles Dodgers in return for a minor leaguer in mid-June, then played 84 games with Los Angeles, hitting .230 with no power while filling in for an injured Rafael Furcal at shortstop. He did make the only postseason appearance of his career that year, getting a hit in his only at-bat in the NLDS, and getting into a couple of games as a substitute in the NLCS.

He was signed to a minor league contract by the New York Yankees on January 6, 2009 and played in 21 games for them, filling in at third base during an injury to Alex Rodriguez, but hitting only .136. Released, he signed on with the New York Mets later in 2009, where he played another 14 games, hitting .148. He played briefly in AAA in the San Francisco Giants organization in 2010, and for the Arizona Diamondbacks' top affiliate, the Reno Aces in 2011.

Berroa became a coach with the Salem Red Sox in 2016 and GCL Red Sox in 2017-2019. He is the son-in-law of former Royal and big league coach Luis Silverio.