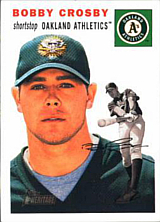 Bobby Crosby played eight seasons in the big leagues, primarily with the Oakland Athletics. He was the American League Rookie of the Year in 2004.

Crosby was a star at Long Beach State, where he was 2000 Big West All-Star shortstop and 2001 Big West Player of the Year. In 2000, he also won the Jacques Reuvers Award during Haarlem Baseball Week. He was picked in the first round of the 2001 amateur draft by the A's and had a terrific 11 games in Modesto of the California League. Back at Modesto in 2002, he hit .307 in half a season and was called up to Midland of the Texas League where he hit .281. The following year, in 2003, he starred at Sacramento of the Pacific Coast League, posting a batting line of .308/.395/.544 and being named Baseball America First Team Minor League All-Star shortstop as well as PCL Rookie of the Year.

The A's did not retain Crosby for 2010 and the Pittsburgh Pirates signed him with no intention of making him a starter. Even playing for a last-place team, his .224/.301/.295 with only 9 extra-base hits in 61 games was not enough, and at the trading deadline, he was dumped on the Arizona Diamondbacks in a five-player trade. Bobby went 2 for 12 for the D-Backs before drawing his unconditional release before the end of August, bringing his big league career to an end. He attempted a comeback in 2013, going to spring training with the Milwaukee Brewers after having spent a full season away from baseball. He became a coach with the Midland Rockhounds in 2019 and was scheduled to be manager of the Stockton Ports before the season was cancelled due to Covid-19. Crosby managed Midland in 2021.

Bobby is the son of Ed Crosby, and his brother, Blake, was drafted by Oakland in 2009 out of Sacramento State. Blake currently works as a Toronto Blue Jays crosschecker. Their older brother, Brian, zagged out of the family business to become an artist for Walt Disney Imagineering.