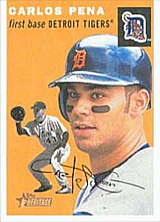 Carlos Peña had a 118 OPS+ and 285 homers in 13 seasons in the majors, also drawing 813 walks. He led the league once in homers and made one All-Star team. Pena whiffed at least 140 times for seven seasons.

When he left the Rays after his second go-round with the team at the end of the 2012 season, he was the franchise's all-time leader in home runs with 163. He was caught and passed by Evan Longoria in 2014.

Carlos joined the MLB Network as a studio analyst following his retirement in 2014. He called games at the 2017 CWS Super Regionals for ESPN and was a fill-in broadcaster for Boston Red Sox games on NESN, beginning with the 2019 season. He became eligible for the Hall of Fame in its 2020 election but did not receive a single vote and was dropped from the ballot.