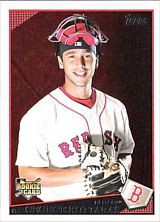 A native of Canada, George Kottaras played for several teams in his career, and made several appearances with Greece and Canada in international competition. He made the majors in his 6th season.

Kottaras was drafted by the San Diego Padres as a draft-and-follow pick in the 20th round of the 2002 amateur draft. He was signed by scout Lane Decker for $375,000 in May 2003 and debuted professionally that summer, hitting .259/.348/.476 for the Idaho Falls Padres. He joined the Greek national team and hit .208/~.407/.250 in the 2003 European Championship as his team won the Silver. His 8 walks were second in the tournament, one behind Claudio Liverziani.

In 2004, Kottaras led all Padres farmhands with a .415 OBP. He batted .310/.415/.461 for the Fort Wayne Wizards. Had he qualified, he would have ranked 7th in the Midwest League in average. His OBP was 30 points behind MWL leader and league All-Star catcher Daric Barton. He rejoined the Greek national squad for the 2004 Olympics and batted .250/.308/.333 in 4 games in the Summer Games. He played two contests at both catcher and first base. All three of his hits came in Greece's win over Italy.

Kottaras batted .303/.390/.469 in 91 games for the 2005 Lake Elsinore Storm and .287/.397/.416 in 29 contests with the Mobile BayBears. His 36 doubles led Padres minor leaguers. Baseball America rated him as the 17th-best prospect in the California League, right behind Nate Schierholtz and the #2 prospect in the San Diego chain. Kottaras continued his climb in 2006, with a .276/.394/.451 campaign in 78 games for Mobile and a .210/.286/.361 line in 33 games for the Portland Beavers. He hit just .111 against left-handers while with Portland. Baseball America rated him the #14 prospect in the Southern League, between Tyler Lumsden and Alberto Gonzalez. Kottaras also dazzled in the 2006 Futures Game. He started at catcher for the World team, hitting 7th. In the second inning, he doubled against Homer Bailey and scored on a Chin-Lung Hu double for a 1-0 World team lead. By the time he batted again in the 4th, the World trailed 7-2. He did his part, with a 2-run homer off of Philip Hughes to score Wladimir Balentien. Kottaras was replaced by Salomon Manriquez at catcher before he batted again. He finished the day as the World's top player in total bases and runs and tied Balentien for the RBI lead. The World team lost, 8-5.

That September, he went to the Boston Red Sox as the player to be named later in the trade for David Wells. He immediately was added to Boston's 40-man roster and joined the Portland Sea Dogs for the playoffs, his second Portland of the year. He hit .276/~.400/.552 in the playoffs with 8 RBI in 8 games to help the Sea Dogs to the title.

Kottaras had a disappointing first year in the Red Sox organization, hitting .241/.316/.408 for the 2007 Pawtucket Red Sox. While it was the lowest OPS of his career by 30 points, he still had an OPS only six points below league average. He was still just 24 years old, not that advanced in years by any means. His average was only .243 in 2008, but he did hit 18 doubles and 22 homers for Pawtucket plus drew 64 walks. This led to a .348 OBP and .456 slugging percentage, an OPS well above average for the 2008 International League, earning a call-up to the Red Sox in September. He made his debut replacing Jason Varitek in the 7th inning of the first game of a doubleheader on September 13, 2008, against the Toronto Blue Jays. He struck out against A.J. Burnett in his first at-bat, but still reached base on a wild pitch and came around to score the Sox's only run in an 8-1 loss.

In 2009. Kottaras made the Red Sox's roster as a back-up to Varitek. In practice, this meant that he had the very specialized job of catching knuckleballer Tim Wakefield. Kottaras played 45 games, hitting .237 with 1 homer and 10 RBI. He was placed on waivers after the season and picked up by the Milwaukee Brewers, where he continued as a back-up catcher. In 2010, he hit .203 in 67 games, but with good power - 12 doubles and 9 homers in 212 at-bats. He played 49 games in 2011 as Jonathan Lucroy claimed the regular starting job, but posted his best batting line at .252/.311/.459. On September 3rd, he hit for the cycle against the Houston Astros; he was the first player in the majors to record the feat that year, although he was joined a week later by the San Francisco Giants' Pablo Sandoval. The Brewers won the NL Central title handily, allowing George to play in the postseason, where he was a combined 0 for 8 in 3 games as the Brewers were eliminated by the St. Louis Cardinals in the NLCS. He was back with the Brewers for a third season as a back-up in 2012, and got to play a bit more in the early going when Lucroy suffered an off-field injury. He hit only .209 in 58 games, although with an excellent .409 on-base percentage and .360 slugging percentage. He was a victim of a numbers game; the younger Martin Maldonado playing well when called up after Lucroy's injury, and George paid the price when the starter returned, being traded to the Oakland Athletics in return for P Fautino De Los Santos on July 28th.

Getting traded to Oakland was an excellent career break for for Kottaras, as at the same time, the A's had sent away their starter of many years, Kurt Suzuki, to the Washington Nationals. Derek Norris was slated to be the new starter, but he was hitting below .200, while Kottaras showed what he could do - provide excellent defense, with some power and an OBP well above average. He won the starting job by the end of August, coinciding with the A's making an unexpected push for a wild card spot. On August 31st, he had a career game against his former team the Red Sox, hitting a pair of homers and driving in 5 runs and scoring 3 in a 20-2 win. Overall, he hit .212 but with 6 homers and 19 RBI in 27 games for Oakland, to bring his season's totals to .211/.351/.415, 9 homers and 31 RBI in 85 games between Milwaukee and Oakland; in spite of the low batting average, his OPS+ was 108, thanks to his power and walks. Norris was the starter for Oakland in the postseason as the A's lost the ALDS to the Detroit Tigers in five games; George played in four of those, but only went to bat five times, going hitless with a sacrifice hit.

In spite of his solid contribution, the A's decided to place Kottaras on waivers in January of 2013, and he was claimed by the Kansas City Royals and made the team's Opening Day roster as the back-up catcher to Salvador Perez. He played only 46 games for the Royals as Perez emerged as an All-Star catcher; Kottaras hit .180 with 5 homers and 12 RBI, but still had an OPS+ of 98 in spite of the low batting average thanks to his power and ability to draw walks. After the season, he was sent to the Chicago Cubs in return for future considerations.

George's employment was involved in a spirited game of hot potato beginning in the 2014 season. He failed to make the Cubs out of spring training, signing a minor league deal with the Cleveland Indians and earning two call ups. During his time there, he became the first Indian to homer in his first 2 plate appearances. In July he was DFAed and claimed by the St. Louis Cardinals, where he stuck for two weeks before drawing his release. The Toronto Blue Jays signed him in August, called him up in September and gave him 4 at-bats before outrighting him after the season.

He did not return to the majors, but stuck around organized ball between 2015 and 2016, logging time in the minors for the Chicago White Sox, the Blue Jays, the San Francisco Giants and the Atlanta Braves. He played for Team Canada in the 2017 World Baseball Classic as their main backstop; while he was only 2 for 9, he managed the team's second-best average, after Rene Tosoni.

His brother, James Kottaras, was drafted in the 2008 amateur draft.