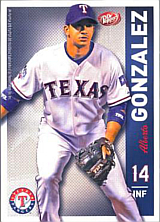 Alberto Gonzalez was signed by scout Miguel Nava for the Arizona Diamondbacks in 2003. He made his pro debut with the DSL Diamondbacks that summer. He was traded to the New York Yankees on January 9, 2007, as part of the trade that sent P Randy Johnson back to Arizona, and made his major league debut with the Yankees on September 1 of that year. He hit .071 in 12 games that season, and .173 in 28 games at the start of the 2008 season, serving as a back-up at various infield positions both years.

Gonzalez was traded to the Washington Nationals on July 31, 2008 for minor league pitcher Jhonny Nunez, who was with the Double-A Harrisburg Senators. He only played 17 games for the Nationals after the trade in 2008, hitting .347. In 2009 and 2010, however, he played over 100 games both seasons, splitting his time almost equally between second base and shortstop the first year, then moving between second base, third base and shortstop the second. He hit .265 with 16 doubles the first year, but fell to .247 the second, with OBPs below .300 both seasons. On March 28, 2011, the Nationals traded him to the San Diego Padres for minor leaguer Erik Davis. He once again played over 100 games for the Padres, but hit a poor .215/.256/.283 as the team's utility infielder. In 2012 he had only limited playing time for the Texas Rangers, hitting .241 in 24 games, complemented by 14 games with the AAA Round Rock Express.

Gonzalez started the 2013 season as a utility infielder for the Chicago Cubs, but was sent down to the AAA Iowa Cubs in late April, and then suddenly found himself starting for the first-place New York Yankees in mid-May. Derek Jeter was out with an ankle injury, and back-up Eduardo Nunez was also banged up. The Yankees purchased his contract from the Cubs on May 9th, with Nunez ailing, and put him in the starting lineup for both ends of a doubleheader against the Cleveland Indians on May 13th, when Nunez finally was placed on the disabled list. In his third game on May 15th, he got an unusual assignment, as manager Joe Girardi asked him to take the mound with the Yankees trailing the Seattle Mariners, 12-2, with two outs in the 9th. Starter Philip Hughes had been chased in the 1st inning, and two rookies, Preston Claiborne and Brett Marshall had gamely pitched the Yankees thus far, but Girardi did not want to use one of his top relievers in a lost cause. Gonzalez faced only one batter, getting Robert Andino to fly out to Ichiro Suzuki in right field to end the inning.

He last played with the Guerreros de Oaxaca of the Mexican League in 2016.