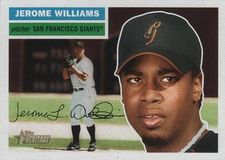 Jerome Williams was a highly-touted prospect in the minor leagues, but struggled in the majors before finding a niche in the 2010s.

Williams is a Hawai'ian-Chinese-Portuguese-Spanish-Japanese-Norwegian-African-Filipino-American. He was born and grew up in Hawai'i.

Jerome debuted professionally with the Salem-Keizer Volcanoes, going 1-1 with a 2.19 ERA. Had he qualified, he would have led the Northwest League in ERA. In 2000, the 18-year-old right-hander was on the San Jose Giants, where his record was 7-6, 2.94. Opponents hit .200 or .201 against him (The 2001 Baseball Almanac lists the former figure, the 2007 Nationals Media Guide the latter). He finished fifth in the California League in ERA. Baseball America rated him as the #3 prospect in the Cal League behind Antonio Perez and Ryan Ludwick.

Williams made it to AA as a teenager and was 9-7 with a 3.95 ERA for the Shreveport Swamp Dragons. He pitched for the US in the 2001 Futures Game, allowing a solo homer to Wilson Betemit in his only inning of work; it would be the lone run the World team scored that year as the US won. Baseball America ranked him as the #12 Texas League prospect (between Nathan Haynes and Ludwick), the #10 prospect among right-handed pitchers and the #1 prospect in the Giants chain.

The youngest pitcher in the 2002 Pacific Coast League, Williams was 6-11 with a 3.59 ERA with the Fresno Grizzlies. He was 8th in the PCL in ERA. Baseball America rated him as the #21 prospect among right-handed pitchers (3 spots ahead of Johan Santana) and #16 in the PCL, between Lyle Overbay and Angel Berroa.

Williams began 2003 with Fresno and was called up after a 1-1, 1.29 start in four games to fill in for Jason Schmidt, who was on the bereavement list. In his major league debut on April 26th, he walked Ray Durham, the first batter he faced, and finished with a loss in which he walked five and allowed five runs in four innings. He returned to the minors and was 4-2 with a 2.68 ERA when called back up. When Williams came up at the age of 21, he wore a puka shell necklace at all times as a memory of his mother who had died of breast cancer while Jerome was in the minors. The Cincinnati Reds once asked an umpire to have Williams remove it during a game, but the necklace returned for other games. For the 2003 Giants, Williams was 7-5 with a 3.30 ERA (130 ERA+). On June 27th, he became the first Giants rookie to throw a shutout since Mike Remlinger in 1991 and the youngest since Pete Falcone in 1975. He then was the 4th Giants rookie (and first since 1937) to start a postseason game, getting knocked out in the 3rd inning of a Game 3 loss to the Florida Marlins in the NLDS.

The necklace returned in 2007, when Williams signed with the Washington Nationals. However, Wiliams was now going through a long walk across the desert. His last win as a major league pitcher had come in 2005, and he would not again appear in the winning column until August 21, 2011, when he beat the Baltimore Orioles, 7-1, while pitching for the Los Angeles Angels of Anaheim. In between were years of struggles in the minor leagues, a year in Taiwan playing in the CPBL, and even some time in the independent Atlantic League, interspersed with brief, unsuccessful appearances in the big leagues, the last coming with the Nats in 2007 when he was 0-5, 7.20 in six starts. He later explained that things had been too easy for him when he reached the majors at 21, and that he had stopped working hard, falling into bad habits; he had also had trouble adjusting to the faster pace of life on the continent after a laid-back youth in Hawai'i. But he wanted to show his kids that he could succeed again as a major league pitcher, and as result not only did not quit, but began to work hard. He developed a number of breaking pitches to complement his original fastball-slider combination, making him a more complete pitcher. When he left the August 21st game after seven innings and with a big lead, he pointed to the sky to dedicate the win to his late mother. He didn't have to wait nearly as long for his next win, picking it up in his following start when Mike Trout hit a pair of homers and his teammates scored 8 runs in the 5th inning against the Seattle Mariners on August 30th for a 13-6 win. He finished the year with a major league record of 4-0, 3.68 in 10 games.

Williams built on his strong late-season play in 2011 to earn a spot on the Angels' pitching staff at the start of 2012. He struggled along with the rest of the team in April, going 1-1, 5.51 in 3 starts, but on May 1st, he threw a complete game shutout against the Minnesota Twins, winning 4-0. He had thrown one previous career shutout, as a rookie in 2003 - nine years earlier. It was also his first complete game since that same year; the span of 8 years and 9 months between complete games was the longest in the majors since Lindy McDaniel had gone 13 years between complete games between 1960 and 1973. On June 18th, after coming out of a game against the Giants, he had to be hospitalized for shortness of breath; he was released the next day after undergoing tests, but there was concern that the asthma condition that had affected him for years was worsening. He was placed on the disabled list the next day. He finished the year at 6-8, 4.58 in 32 appearances, including 15 starts. He was back as a swingman for the Angels in 2013, making 37 appearances, including 25 starts. With the Angels' rotation struggling with health and effectiveness issues all season, he ended up second on the staff in innings pitched with 169 1/3 - his highest career total, as were his 107 strikeouts. He was 9-10, 4.57, and generally gave the Angels everything they could have hoped for, but he still ended up being non-tendered after the season, making him a free agent.

Williams signed with the Houston Astros in 2014. The Astros signed him as much for his prowess on the mound as for his role as a potential mentor for their host of young pitchers. As manager Bo Porter put it: "Him sitting down and having some of those conversations with some of our younger guys, of being a former prospect and going through all the different changes that he had to go through to be where he's at in his career, I think it's very beneficial for our younger guys to have that kind of experience sitting on our ball club." He made 26 outings for Houston, all of them in relief, going 1-4, 6.04, before being released on July 8th. He was immediately signed by the Texas Rangers and made two starts for them, with a record of 1-1, 9.90. He was placed on [waivers]] in early August and claimed by the Philadelphia Phillies on August 10th. The Phillies put him in their starting rotation, and he began to pitch very well. On September 20th, he did something no pitcher before him had ever done when he pitched seven scoreless innings to defeat the Oakland Athletics, 3-0: his only wins for the Astros and Rangers had also come against the A's, making him the first pitcher to ever beat the same team while playing for three different teams.

Williams became a coach with the Kingsport Mets in 2019.