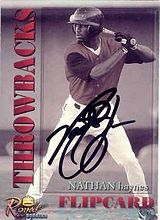 Haynes only appeared in 1 game for the Fresno Grizzlies in the San Francisco Giants chain in 2004, and 7 games for the AZL Giants in 2005 (serious injury?).

After beginning 2006 with the Gary SouthShore RailCats of the independent Northern League, Haynes, still just 26, returned to the Angels chain with AA Arkansas and hit .280 with 18 steals in 52 games. He ended the season back in Salt Lake City, playing in 16 games with the Bees.

Haynes began the 2007 campaign at Salt Lake. After hitting .391 in 43 games, he was called up by the Angels and made his big league debut on May 28th.

Haynes became a coach for the Orem Owlz in 2011. In 2012, Haynes replaced Francisco Matos on May 30th as hitting coach of the Arkansas Travelers after Matos moved up to the Salt Lake Bees. Haynes was a coach for the Burlington Bees in 2013.