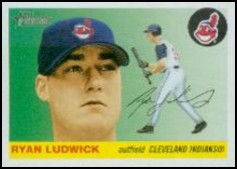 Ludwick was traded at the trading deadline, July 31st on two consecutive years. First, in 2010, the St. Louis Cardinals dealt him to the San Diego Padres, who fell just shy of the NL West title. The following year, with the Padres out of the race, they sent him to the Pittsburgh Pirates for a player to be named later. It was the second big trade for the surprising Pirates in two days, as they had acquired 1B Derrek Lee from the Baltimore Orioles a day earlier.