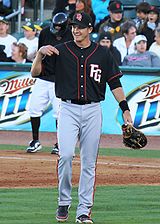 Brett Pill is a first baseman who played for the San Francisco Giants. He is the brother of Tyler Pill and son of Michael Pill.

Pill was a redshirt freshman for Cal State Fullerton in 2003. In his first year of college, 2004, Pill played in 50 games but had only 80 at-bats, hitting .313 with two home runs and 17 RBI. In the finale of the 2004 College World Series, he had a crucial pinch-hit triple to help Fullerton take the title.

In 2007, he played for the Augusta Greenjackets, hitting .269/.321/.416 with a South Atlantic League-leading 47 doubles as well as ten home runs and 91 RBI in 137 games. He led all Giants farmhands in two-baggers and tied Jed Lowrie and Christian Colonel for 4th in the affiliated minors in that department. He also tied Adrian Cardenas for the SAL lead in double plays ground into (17) and led the loop's first basemen in putouts (1,197) and double plays (103).

Brett Pill was called up to San Francisco on August 31, 2011, just in time to be added to the postseason roster, although that was in doubt as the Giants were trailing the Arizona Diamondbacks by 6 games at the time. His recall was part of a series of moves by the team, as they designated for assignment veterans Aaron Rowand and Miguel Tejada while activating Pat Burrell from the disabled list and calling up Pill. The moves were aimed at waking up a slumbering offense and gearing up for a run to return to the postseason. He made his debut on September 6th against the San Diego Padres and immediately made his presence felt, hitting a two-run homer off Wade LeBlanc in his first major league at-bat.