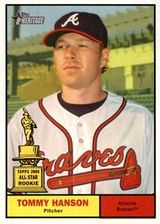 Tommy Hanson pitched in the majors for five seasons.

Hanson was chosen in the 22nd round of the 2005 amateur draft by the Atlanta Braves as a draft-and-follow pick. He was signed by scout Tom Battista and made a fine pro debut with the 2006 Danville Braves, going 4-1 with a 2.09 ERA, 56 strikeouts and 9 walks in 51 2/3 innings while holding opponents to a .218 average. Had he qualified, he would have ranked second in the Appalachian League in ERA behind Jamie Richmond. Hanson and Richmond helped Danville win the Appy title that year. Baseball America ranked Hanson the league's 4th best prospect, one slot ahead of Richmond; no pitcher was rated higher.

Tommy was very good in 2007 but had little run support. He was 2-6 with a 2.59 ERA for the Rome Braves, allowing 59 hits and striking out 90 in 73 innings, holding opponents to a .194 average. Promoted to the Myrtle Beach Pelicans, the tall right-hander was 3-3 with a 4.20 ERA and over a strikeout per inning. He led Braves farmhands with 154 strikeouts and a .216 opponent average. Baseball America rated him the best pitching prospect in the South Atlantic League and the 14th best overall prospect in the circuit (between Adrian Cardenas and Brandon Snyder). He was the 8th best prospect in the Carolina League, behind Brandon Erbe.

Hanson began 2008 even better, going 3-1 with a 0.90 ERA for Myrtle Beach, 49 strikeouts and only 15 hits in 40 innings for a .116 opponent average. That earned him a quick promotion to the Mississippi Braves, where he threw the first no-hitter in team history on June 25, fanning 14 Birmingham Barons. Hanson was 8-4 with a 3.03 ERA for Mississippi, allowing a .197 average and fanning 114 in 98 innings. He led Atlanta farmhands in ERA (2.41), strikeouts (163) and opponent average (.175) and was named their Minor League Player of the Year. He was 4th in the affiliated minors in strikeouts behind David Bromberg, David Hernandez and Madison Bumgarner. Baseball America rated him the 9th best prospect in the Southern League, between Michael Saunders and Wade Davis. Had he qualified, he would have led the Southern League in ERA.

Tommy kicked off 2009 with the Gwinnett Braves, going 3-3 with a 1.49 ERA, 90 strikeouts in 66 1/3 innings and only 40 hits allowed. He was leading the International League in ERA (.25 over Clay Buchholz) and strikeouts (24 more than Carlos Torres). That prompted Atlanta to call him up, releasing 300-game winner and future Hall-of-Famer Tom Glavine to make room for him on the parent club's roster.

Hanson had a rough big league debut. After 3 perfect innings (with 4 Ks) against the Brewers, he gave up a 4th-inning 2-run homer to Ryan Braun. The next inning, Jason Kendall singled and stole and scored on a double by pitcher Manny Parra. Braun and Mike Cameron both hit 2-run shots off Hanson in the 6th and he left with a 7-5 deficit. Atlanta rallied to win the game. Hanson then won his next start against the Baltimore Orioles, giving up two runs in 5 2/3 innings. That sent him on his way to a very good rookie season, finishing the year 11-4, with a 2.89 ERA and 116 strikeouts in 21 starts. He was named to the 2009 Topps All-Star Rookie Team after the season.

Hanson spent the entire 2010­ season in the majors, making 34 starts for the Braves and going 10-11 with a very solid 3.33 ERA. He pitched over 200 innings and struck out 173 batters, making him one of the pillars of a pitching staff that took the team to a National League wild card berth. He started Game 2 of the NLDS against the San Francisco Giants but he was hit hard, giving up 4 runs in 4 innings; he escaped with a no-decision as his bullpen was outstanding until losing the game in the 11th inning. In 2011, he was limited to 22 starts by shoulder problems, but again pitched well when healthy, going 11-7, 3.60. His last appearance was on August 6th, when he was shelled for 7 runs in 3 1/3 innings in a start against the New York Mets, then went on the disabled list for the rest of the season. At that point, the Braves seemed assured to return to the postseason; however his absence from the starting rotation down the stretch was one of the factors contributing to the team's September collapse that saw the Braves lose a postseason berth to the St. Louis Cardinals on the last day of the season.

Hanson had a relatively awkward delivery when pitching, making a visible pause before releasing the ball. This led to vulnerability against the stolen base, allowing 81 over his first three seasons, the highest total in the majors over that span. The Braves were also concerned that the hitch was contributing to the shoulder problems he experienced in 2011. Coach Roger McDowell worked with him after the season to make some changes in order to improve his mechanics. He pitched to mixed reviews in 2012, on the one hand setting a personal best with 13 wins (against 10 losses), but also posting his worst ERA at 4.48 and walking 71 batters in 174 2/3 innings, although he did strike out 161 batters. The Braves were concerned about a significant drop in his average velocity that made him into more of a finesse pitcher than the power pitcher they had envisioned when they first brought him up. On November 30th, they traded him to the Los Angeles Angels of Anaheim for reliever Jordan Walden.

He continued to regress with the Angels in 2013, making only 15 appearances (13 starts) with a record of 4-3, 5.42. Bothered by health issues, he also made 5 starts in the minors that season, and missed time because of the emotional toll caused by the death of his half-brother, with whom he was extremely close. He became a free agent and signed with the Texas Rangers on February 14th, but pitched poorly during the spring and was released on March 26th, having lost the fifth starter job to rookie Nick Martinez. Hanson spent the 2014 season in the Chicago White Sox chain, going 3-5 with a 6.16 ERA in 10 starts for the Charlotte Knights. He moved on to the San Francisco Giants organization in 2015, splitting the year between the San Jose Giants and the Sacramento River Cats.

On November 8, 2015 Hanson was hospitalized at Piedmont Hospital in Atlanta, GA, the result of a suspected drug overdose. He suffered "catastrophic organ failure" and slipped into a coma the next day. He passed away on November 9th, surrounded by friends and former teammates. On December 12th, a coroner confirmed that he had died from "delayed complications of cocaine and alcohol toxicity".