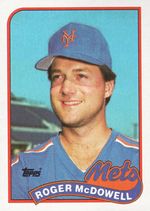 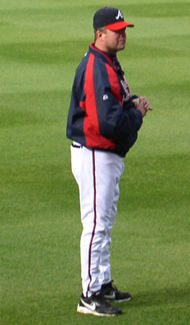 Reliever Roger McDowell pitched a dozen seasons in the majors and since 2006 has been the pitching coach of the Atlanta Braves.

After attending Colerain High School and Bowling Green State University, McDowell was signed as a third round of the 1982 amateur draft by the New York Mets and scout Bob Wellman. Primarily a starter in the minors, he pitched almost exclusively out of the bullpen after reaching the majors in 1985 aside from two starts in his rookie season. In his first year, he saved 17 games and tied Jesse Orosco for the team lead. The next summer, he won 14 and saved 22 as the Mets went on to win the 1986 World Series.

After being slowed by a hernia at the start of the 1987 season, McDowell went on to record a career-best 25 games that year. The next summer, he lost the closer job to Randy Myers but still notched a 2.63 ERA and saved 16 games. Midway through the following season, he was traded to the Philadelphia Phillies with Lenny Dykstra for Juan Samuel and posted a 1.11 ERA and 19 saves in 44 games after the deal.

McDowell was traded to the Los Angeles Dodgers at the trading deadline in 1991 after about two years in Philadelphia. He pitched three and a half years with the Dodgers before spending 1995 with the Texas Rangers. He ended his career with the 1996 Baltimore Orioles, where he was reunited with former Mets skipper Davey Johnson and former teammates Orosco and Myers.

Following his playing days, McDowell was a minor league pitching coach in the Dodgers organization with the South Georgia Waves in 2002 and 2003 and the Las Vegas 51s in 2004 and 2005. He replaced Leo Mazzone as the pitching coach of the Atlanta Braves starting in 2006.

McDowell got in trouble on April 23, 2011 when he got in an altercation during pre-game batting practice at San Francisco's AT&T Park. McDowell is alleged to have made lewd gestures with a bat and to have used homophobic language, then, when asked by a fan to refrain from such offensive behavior with children around, threatened the fan with physical violence and used profanities. McDowell apologized a few days later, but not before Commissioner Bud Selig had issued a statement calling the alleged conduct "highly inappropriate" and asking the Braves to conduct a full investigation in order for him to mete out appropriate punishment. That statement was made under threat of a lawsuit from the fan's attorney if MLB failed to take significant disciplinary action against McDowell. The Braves placed McDowell on administrative leave on April 29th, as minor league pitching instructor Dave Wallace was called up to replace him. On May 1st, Selig handed down his decision, suspending McDowell without pay for two weeks, fining him an undisclosed amount and ordering him to attend sensitivity training.

McDowell was dismissed by the Braves after the end of the 2016 season, but shortly thereafter was hired to be the pitching coach of the Baltimore Orioles in 2017 and 2018.

Away from the diamond, McDowell appeared on the television show Seinfeld as himself.