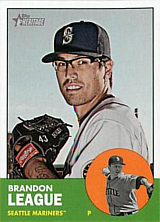 Brandon League was an All-Star in the majors.

He was 1-0 with a 2.00 ERA and 12 K in 9 IP for the US team that won Silver in the 2000 World Junior Championship. He led the team in batters whiffed (though 21 behind tourney MVP Shin-soo Choo) and was 3rd on the US in ERA after Marc Kaiser and Jason Snyder (second to Snyder among qualifiers). He was drafted by the Toronto Blue Jays in the 2nd round of the 2001 amateur draft. He was signed by scout David Blume for $600,000 to forgo a scholarship to Pepperdine University and made his pro debut that summer.

League was touted as a future closer ever since he made his major league debut as a September call-up with the Toronto Blue Jays in 2004. He had an outstanding fastball, complemented with a cutter that had a lot of movement, but a lack of control hampered his success in the big leagues in his first years, forcing him to spend time in the minor leagues each year from 2005 to 2008. He made the Jays' bullpen out of spring training in 2009 after posting a 2.18 ERA over the second half of 2008 and finally seemed ready to cash in on his promise with the opportunity to shine presented by closer B.J. Ryan's early-season injury. However, while he pitched very well in low-pressure situations, he was unable to step up with the game on the line, and remained stuck in a lower-level role in the bullpen. In 67 games, he went 3-6, 4.58 but did strike out over a batter per inning.

After the 2009 season, the Blue Jays traded League to the Seattle Mariners in return for a very similar pitcher, Brandon Morrow, also a top draft choice with tremendous stuff but mixed results as a relief pitcher. League had his most consistent season with Seattle in 2010, appearing in 70 games with a 9-7 record and 6 saves, but his K/BB rate fell to 56/27 in 79 innings, and he again experienced difficulties when pitching in more pressure-packed situations. Still, the Mariners should have been satisfied with his performance, but League was made to look poor in comparison as Morrow had a breakout season after being converted to a starting pitcher by the Blue Jays.

League finally got an extended shot at the closer role at the start of the 2011 season, as David Aardsma began the year on the disabled list. He converted his first 10 save opportunities before faltering in the 13th inning of a game against the Baltimore Orioles on May 10th and being charged with a loss. Still, he did so well over the first half that he was named to the All-Star team and finished the year with 37 saves and a 2.79 ERA. On June 8, 2012, he did not pick up a save but pitched brilliantly in one of the most pressure-packed games of his career. He came into the 8th inning of a game against the Los Angeles Dodgers with one out and runners on second and third base. The Mariners were nursing a 1-0 league, and more importantly, four pitchers had managed to keep the Dodgers hitless until that point. He managed to preserve both the lead and the no-hitter, getting A.J. Ellis to line out to left before striking out Tony Gwynn. Tom Wilhelmsen then pitched the 9th inning, completing the no-hitter, which tied the record set by the Houston Astros in 2003 of six pitchers being used in a no-hitter. Rookie Stephen Pryor may have got credit for the win, and Wilhelmsen the save, but it was League's clutch performance that made it all possible. With Wilhemsen's development as a closer, save opportunities became far fewer for Brandon, and he had only racked up 9 saves by the end of July, to go with an 0-5 record and a 3.63 ERA. More worrying, his strikeouts were down to 27, against 19 walks, in 44 2/3 innings. On July 30th, he was traded to the Los Angeles Dodgers in a deadline deal, with the Mariners getting two youngsters in return, Leon Landry and Logan Bawcom. He pitched 28 times for the Dodgers, with a solid 2.30 ERA, a 2-1 record and 6 saves.

League's strong performance after joining the Dodgers in 2012 ensured that he was the team's designated closer at the start of the 2013 season. However, he was not up to the task, as after 24 games, his record stood at 2-3 with 13 saves, but with a 6.00 ERA and 4 blown saves. On June 11th, with the Dodgers struggling in last place in the NL West, manager Don Mattingly announced that he was pulling the plug, installing set-up man Kenley Jansen in League's place as the closer. He muddled through middle relief for two seasons and was released after rehabbing a shoulder injury in 2015. An attempt to catch on with the Kansas City Royals in 2017 proved fruitless.

Born in California, League grew up in Hawaii. He wore goggles on the mound with the Blue Jays, but switched to contacts when he moved to Seattle.