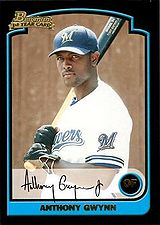 The son of Tony Gwynn and nephew of Chris Gwynn, Tony Gwynn (also sometimes called Anthony Gwynn or Tony Gwynn, Jr.) was drafted by the Milwaukee Brewers in the 2nd round of the 2003 amateur draft. He was signed by scout Bruce Seid and made his pro debut that summer.

Gwynn played three seasons with the Milwaukee Brewers after making his debut in 2006. In 2009 he had his best season in the majors, playing for the San Diego Padres, the team with which his father spent his entire 20-year career, and hitting .270 (with a .350 OBP) in 393 at-bats at age 26. After a less-impressive season with the bat in 2010, he signed as a free agent for 2011 with the Los Angeles Dodgers and appeared in 136 games for the team.

Before coming to the majors, he spent 2005 with the Huntsville Stars of the Southern League, hitting .271 and stealing 34 bases. He then hit .300 in 2006 for the Nashville Sounds, placing him 10th in the Pacific Coast League. Gwynn was called up to the big leagues on July 15th of that season. He then was one of several youngsters who led the Brewers' resurgence in 2007 when the team finished over .500 for the first time in more than a decade.

In 2009 he was at spring training with the Brewers and was thought likely to become the team's fourth outfielder. However, he came down with a sore throwing shoulder and that hurt his chances. He was put on waivers and when not claimed, was sent down to Nashville in early April. He was then traded to the Padres and began to play regularly in the outfield. He hit .270 in 119 games for the Padres in 2009, setting career highs with 106 hits and 59 runs. Power was lacking, however, as he had only 19 extra-base hits and 21 RBIs. He was the team's main centerfielder that season and again in 2010, when he played 117 games. His average fell to .204 however and his OPS+ tumbled from 93 to 68, given that much of his value as a player came from hitting singles.

Gwynn joined the Dodgers as a free agent before the 2011 season. He played mainly in left field that year, then split time between left and center in 2012. He played a career-high 136 games in 2011, hitting .256 with 2 homers and 22 RBI; his 22 stolen bases were a career best. He then hit only .232 with no homers the next year and spent 2013 in the Dodgers' minor league system, hitting an even .300 with the Albuquerque Isotopes.

He became a member of the Philadelphia Phillies in 2014. He went on bereavement leave when his father suddenly passed away from cancer on June 16th. He was hitting only .155 in 52 games at the time, having been used mainly as a pinch-hitter with a few starts in center field. He was given a standing ovation in tribute to his late father when he came back on June 24th and was used as a pinch-hitter in the 7th inning against the Miami Marlins. Realizing that Gwynn was fighting back tears as a result of the highly emotional moment, Marlins catcher Jarrod Saltalamacchia took time out and walked to the mound to allow him to regain his composure; Tony then grounded out to first base.

After retiring from baseball, Tony became involved in craft brewing, something his late father had taken up as well, bringing out his first brew, .394 Pale Ale, shortly before his passing in 2014. It has since become a big hit in San Diego, and Tony is working on bringing out a version with a lower alcohol content.