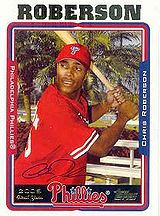 Roberson was only successful on 16 of 28 stolen base attempts in 2004 for the Clearwater Threshers while hitting .307/.371/.473. He made the Florida State League All-Star team as a utility outfielder. He fractured his left leg in July and missed the rest of the year. In 2005, Chris continued to advance one level per year and hit .311/.365/.465 with 34 steals in 48 tries for the Reading Phillies. He hit 15 homers and scored 90 runs, but struck out 112 times. His 320 putouts led Eastern League outfielders and he paced the EL in runs (90), at-bats (553) and hits (172). He was third in the EL in average behind Randy Ruiz and Mike Jacobs and made the league All-Star team. He was named the EL Rookie of the Year.

While his major league career was over at that point, he would continue playing baseball professionally for a decade after that. After having been purchased by the Baltimore Orioles, and later being signed as a free agent by the Arizona Diamondbacks, he spent 2008 and 2009 in AAA in the affiliated minors. He then moved to the Mexican League in 2010 (he had already been playing winter ball in the country for many years, first lining up with the Naranjeros de Hermosillo of the Mexican Pacific League in 2005-06). After a couple of seasons with the Sultanes de Monterrey, he moved to the independent American Association with the Winnipeg Goldeyes in 2012, where he hit .317/.360/.490 with 11 homers in 94 games. It was a one-year thing, though, as he returned to Monterrey every summer from 2013 to 2017, while playing winter ball with the Aguilas de Mexicali starting in the 2011-12 season.

Roberson was named MVP of the 2014 Caribbean Series, playing for Hermosillo, representing the Mexican Pacific League; he had played for Mexicali during the season, but teams headed to the Caribbean series are allowed to beef themselves up with a few extra players. He went 10 for 27 as the winners' leadoff man, adding a pair of homers. His second dinger, hit off Kanekoa Texeira of the Indios de Mayagüez, broke a scoreless tie in the 6th inning of the final game on February 8th. The Naranjeros went on to score five more runs that inning and won the game, 7-1. He had been a member of Mexico's Caribbean Series teams in 2010 Caribbean Series and from 2012 to 2014. He was the first American to be named Series MVP since Matt Stark in 1997 (also for a Mexican squad).