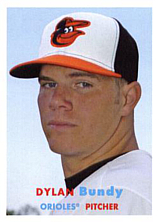 Dylan Bundy was the first high schooler selected in the 2011 amateur draft. His brother, Bobby, has played in the minors.

Dylan was 11-1 with a save and a 1.58 ERA as a high school junior, striking out 164 and allowing 41 hits and 20 walks in 80 innings. He also hit .442 with a slugging percentage of .760 and 51 RBI in 129 at-bats. Baseball America named him the second-team high school All-American utility man; Kaleb Cowart was chosen for the first team. As a senior, Dylan was better yet at 11-0 with 158 strikeouts to 5 walks in 71 innings. On the radar gun, his fastball peaked at 98 mph. In 2011, he was named the Gatorade Male Athlete of the Year, a highly prestigious award open to all high school athletes in the country; he was the first-ever baseball player to be so honored. The Baltimore Orioles took him with the fourth pick of the 2011 draft. He was the fourth straight pitcher chosen, following Gerrit Cole, Danny Hultzen and Trevor Bauer. Bundy's friend, Archie Bradley, was taken three picks later. Dylan did not pitch in the minor leagues that year after signing with scout Ernie Jacobs for a $4 million bonus. In 2012, Bundy was invited to the Orioles' big league camp, even though he had no shot at making the team. He did impress everyone, pitching a scoreless inning of relief against the Boston Red Sox in a Grapefruit League game, but was one of the first players cut. He was sent to the Class A Delmarva Shorebirds to begin his career, and was ranked the number 2 prospect in the Orioles' organization, behind Manny Machado, a commonly high Baseball America ranking for such a high pick.

Bundy made his debut April 6th against the Asheville Tourists and tossed three perfect innings, striking out six, with a dominant start to his career before Miguel Chalas relieved. He was absolutely dominant over the season's first six weeks, not allowing a single earned run over his first 30 innings, allowing only 5 hits and 2 walks while striking out 40. Because he was working on a very strict pitch count, he had to wait until his 8th start, on May 20th, to register his first win with five scoreless innings against the Hagerstown Suns. On May 23rd, the Orioles announced his promotion to the High A Frederick Keys, where he was scheduled to make his next start, having completed his stint in Low A ball with an unblemished ERA. He pitched for the US in the Futures Game, then was promoted again on August 8th, this time to the AA Bowie BaySox, after going 5-3, 2.57, in 10 starts for Frederick. He was 2-0, 3.24 in 3 starts for Bowie, giving him a combined mark of 9-3, 2.08 in 23 starts in his first season. On September 19th, he got an unexpected phone call in the middle of the night while staying at the Orioles' minor league training complex in Florida: the big league O's had just played an 18-inning marathon against the Seattle Mariners, depleting their bullpen, and asked Bundy to join them in Seattle immediately, given he was already on the team's 40-man roster and available to pitch if needed. He made his debut against the Boston Red Sox on September 23rd, retiring both batters he faced in relief of Tommy Hunter in the 8th inning at Fenway Park. In all, he pitched twice, giving up one hit and no runs in 1 2/3 innings.

Bundy was not expected to make the Orioles out of spring training in 2013, but it was clear the team was counting on him to join the big league squad at some point during the season and for more than a mere token appearance. Those plans were delayed when he experienced pain in his elbow in March, and the start of his season was pushed back. The Orioles' doctors decided to treat him with an injection of platelet-rich plasma and some rest, but he suffered what was described as a "significant setback" in his recovery while working out at the team's spring training complex in late June, a development that made it likely that he would require season-ending surgery. Indeed, the Orioles announced June 27th that he would be undergoing Tommy John surgery. Bundy did not return to the majors until 2016, missing all of 2013, then playing 9 games in the minors in 2014 and 8 in AA with Bowie in 2015. He started the season in the bullpen and was used carefully, given how little he had pitched in the previous three years. He spent the entire first half in the bullpen, going 2-1, 3.08 in 22 games, and generally being used in low pressure situations. After the All-Star break, the O's brass decided it was time for him to return to starting duty, and he made his first start on July 17th against the Tampa Bay Rays. It was not great, as he gave up 4 runs in 3 1/3 innings and was charged with a 5-2 loss, but he won his next start, then, on July 27th, facing the Colorado Rockies, he was perfect through five innings before issuing a one-out walk to Mark Reynolds in the 6th and then was tagged by Nick Hundley for a two-run homer that broke a scoreless tie; after a second out, David Dahl connected for his first major league homer, chasing him from the game. He was charged with the 3-1 loss, but it was an encouraging performance, especially since he struck out 8 and walked only 1. His next start, August 2nd, confirmed the positive vibes: he retired the first ten men he faced against the Texas Rangers and again did not allow a hit until the 6th, when Elvis Andrus singled with two outs. He ended up giving up just one hit and a walk over 7 innings to earn a 5-1 win. Bundy ended the season at 10-6, 4.02 in 36 games (14 starts).

In 2017, Dylan was the rare reliable pitcher on a Baltimore Orioles starting staff that struggled with inconsistency and injuries. On August 29th, he pitched the first complete game and shutout of his career when he spun a brilliant one-hitter to defeat the Seattle Mariners, 4-0. The only hit was a bunt single by Kyle Seager in the 4th. He went 13-9, 4.24 in 28 starts, leading the team in wins while pitching 169 2/3 innings, striking out 152 and walking 51. His only black mark was his inability to pitch deep into games. On May 8, 2018, he had just about as bad as a start as a pitcher can have, facing the Kansas City Royals. The 1st inning went like this: Jon Jay hit an infield single; Jorge Soler homered; Mike Moustakas homered; Salvador Perez homered; Lucas Duda walked; Whit Merrifield walked; and Alex Gordon hit a three-run homer, as which point Dylan was mercifully removed from the game. The Royals went on to score 10 runs in the 1st and won 15-7. Bundy was the first starting pitcher ever to allow four homers without retiring anybody. He had a solid 3.76 ERA heading into the game, with a 1-4 record, but that nightmarish start bumped him to 5.31. Things could not have gone any more different in his next start on May 13th, as he pitched 7 scoreless innings, and it was the Orioles who beat down their opponents, the Tampa Bay Rays, winning 17-1. He made 31 starts for the Orioles and, given the team had the worst season in franchise history, wound up with a record of 8-16. He did not pitch particularly well either, as he logged just 171 2/3 innings, led the American League in home runs allowed with 41 and had an ERA of 5.45. The only positive was he struck out a career-high 184 batters. In 2019, the O's had another rough season, but Dylan pitched somewhat better, as he went 7-14, 4.79 in 30 starts. He cut his homers allowed from 41, most in the American League, to 29, even though Baltimore set a record for most homers allowed by a team in a season with 305. He also struck out 162 batters in 161 1/3 innings.

On December 4, 2019, he was traded to the Los Angeles Angels in return for four low-level minor leaguers.