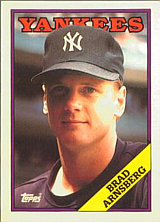 Brad Arnsberg was signed as a 1st round pick in the secondary phase of the 1983 amateur draft by the New York Yankees and scout Gary Hughes. He earned his first win on August 8, 1987. He earned his first save with the Texas Rangers on April 25, 1989, and recorded the save to preserve Nolan Ryan's 300th win on July 31, 1990. Brad later spent one year as player/coach of the Wei-Chen Dragons in Taiwan in 1994, going 3-3 with a save and a 2.66 ERA.

In 1983, he pitched for the Alaska Goldpanners of Fairbanks. "It was weird," he said of the Midnight Sun experience. "You had to have foil on your bedroom windows just to keep the light from jumping in when you were trying to sleep. I remember, unfortunately, walking out of a couple of bars at three or four in the morning and it was broad daylight. It was kind of an odd feeling."

Arnsberg's brother, Tim, pitched in the Houston Astros chain from 1985 to 1987. His son, Kyle, was drafted in 2009 but did not sign and was on the Arizona State University roster in the 2010 College World Series. Kyle currently serves as bullpen catcher for the Yankees.