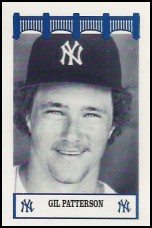 "Yastrzemski . . . called him the best young pitcher he'd seen in the AL for a long time". - from an article about Gil Patterson

Gil Patterson was picked in the secondary phase of the 1975 amateur draft by the New York Yankees. He pitched one year with the Yankees in 1977 at age 21 and then was done in the majors due to arm pain. He had eight operations.

He took a job parking cars at a restaurant that George Steinbrenner went to, and Steinbrenner offered him a job as a coach.

He began coaching in 1984 with the Oneonta Yankees, but was fired after the season for refusing to let Al Leiter pitch with a sore arm. He moved in 1991 to the Oakland Athletics organization. He was the pitching coach for the Madison Muskies in 1992-1993 and the West Michigan Whitecaps in 1994. In 1996, he was the roving minor league instructor. He joined the Arizona Diamondbacks organization as minor league pitching coordinator from 1997 to 2000. In 2001, he got a job with the Toronto Blue Jays as the bullpen coach and then as pitching coach from 2002 to 2004. In 2005 he was a coach for the Columbus Clippers and in 2006 with the GCL Yankees. Starting in 2010, he was the minor league pitching coordinator for the A's. In 2017, he was promoted on an interim basis as bullpen coach of the Athletics, after pitching coach Curt Young was fired on June 15th and replaced by bullpen coach Scott Emerson.

'"He's one of the best pitching coaches anywhere, because he knows how hard pitching is, and he knows what a pitcher goes through to get to the big leagues." - Al Leiter, speaking about Gil Patterson