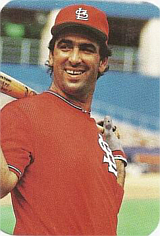 "Jack gave us a bona fide thumper in the middle of the lineup, which we had never had... Jack would hit vicious line drive home runs. And Jack had a persona as kind of a mysterious, tough guy power hitter. He gave our team a mood or a persona that it was lacking before. He just gave us a big hammer in the middle of the lineup. It really complemented the parts around him." - Tommy Herr, to Peter Golenbock, The Spirit of St. Louis 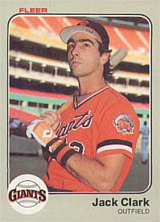 Jack Clark was one of the top sluggers of the 1980s. He clubbed 340 home runs over eighteen seasons, making four National League All-Star teams.

Originally selected by the San Francisco Giants as a pitcher in the 13th round of the 1973 amateur draft, Clark was soon moved off the mound. He primarily played the outfield for the Great Falls Giants in his first pro season, 1973, hitting .321 with 9 home runs in 65 games. The next two summers, he played mostly third base, but made 109 errors over that span. Despite his troubles on defense, he continued to hit well, hitting .315 with 19 homers for the Fresno Giants in 1974 and batting .303 with 23 home runs for the Lafayette Drillers in 1975. In the latter year, he earned a September call-up to the majors, and went 4-for-17 in 8 games. Moved back to the outfield in 1976, Clark spent most of that summer with the Phoenix Giants, for whom he posted a .323 average and 17 homers. That September, he was back in San Francisco, hitting his first big league home run, a solo shot, off Jack Billingham of the Cincinnati Reds on September 11th. He hit .225 in 26 games for the Giants that year.

Clark became the Giants' regular right fielder in 1977 and hit .252 with 13 home runs in his first full major league campaign. The next summer, he came into his own, hitting .306 with 25 homers and 46 doubles, being selected to play in the All-Star Game, and finishing fifth in National League Most Valuable Player voting. He returned to the All-Star Game in 1979, batting .273 with 26 home runs, and won the "Willie Mac Award" in 1980 for his "spirit and leadership". He put together another fine season for San Francisco in 1982, hitting .274 with 27 home runs and 103 RBI and finishing seventh in NL MVP voting. Clark was very vocal in his disdain for Candlestick Park and had difficulties with the front office and skipper Frank Robinson during his Giant tenure.

Prior to the 1985 season, on the heels of an injury-addled .320/.434/.537 line in 57 games in 1984, Clark was traded to the St. Louis Cardinals for four players. The Cards moved him to first base, and he hit .281 with 22 home runs in his first season, drawing 83 walks with an All-Star Game appearance and his first Silver Slugger Award. St. Louis won the NL East title, and Clark hit .381 in the NLCS against the Los Angeles Dodgers, clubbing a Series-winning homer in Game 6 when Dodgers manager Tommy Lasorda declined to issue him an intentional walk in a critical situation. He had another great season in 1987, hitting .286/.459/.597 with a career-best 35 home runs, leading the NL in OBP, slugging and walks (136) while earning another Silver Slugger and finishing third in NL MVP voting. Due to an ankle injury, he was unable to play in that fall's World Series, however.

Clark moved to the New York Yankees as a free agent in 1988 and hit .242 with 27 home runs as the team's designated hitter. After one year in New York, he requested a trade, stating that he hated the American League and their long game times and was dealt to the San Diego Padres. He hit 51 home runs in two seasons with the Padres, leading the league in walks each year (236 total), and worked his way out of town by insulting "Mr. Padre", Tony Gwynn. Clark, with a growing habit of saying things perhaps better left unsaid, called Tony "selfish" and accused him of not doing enough with runners in scoring position, the first of many statements levied against Tony causing clubhouse distractions. He later accused manager Greg Riddoch of being a snake and sneaky, then decided he no longer hated the AL quite so much, signing with the Boston Red Sox as a free agent in 1991. Let go by Boston after hitting just .210 with 5 homers in 81 games in 1992, he signed a minor league deal with the Montreal Expos but was released before ever playing a game in their organization.

Although Clark's career numbers are not likely going to earn him Hall of Fame induction, he has a lifetime OPS+ of 137, showing that he played at quite a high level. An OPS+ of 137 put him in a massive tie for 93rd all-time, along with contemporaries Pedro Guerrero (who was called the best hitter of the 1980s by Bill James) and Will Clark as well as with Hall of Famer Chuck Klein. According to similarity scores, the most similar players to Clark are George Foster, Boog Powell, and Roy Sievers.

Clark managed the River City Rascals of the Frontier League in 1999 and was a Los Angeles Dodgers coach from 2001 to 2003. He was skipper of the Springfield Sliders in the 2008 Central Illinois Collegiate League, drawing criticism for missing at least 10 of the team's 26 home games without explanation. In August 2013, Jack was hired to host a radio show on a St. Louis sports station. He got himself in trouble within his first week on the air by making repeated, unsubstantiated accusations that former Cardinals star Albert Pujols and Detroit Tigers pitcher Justin Verlander had used steroids. "The King And The Ripper" (with Kevin "The King" Slaten) was pulled from the air after a seven-day run, with Pujols filing a lawsuit that October. First doubling down on his speculation, Jack finally apologized in February 2014.

According to Whitey Herzog in his autobiography, Jack once passed a car lot on a way to a game and put down $90,000 on two primo sports cars. Jack's luxury car habit eventually led to his filing for bankruptcy in 1992. At the time, he owned 18 sports cars and was trying to make 17 car payments simultaneously, a bizarre way to live. He eventually lost his home, getting back on his feet in the late 1990s by breaking the habit of buying a new car whenever he got bored with the newest one he owned.