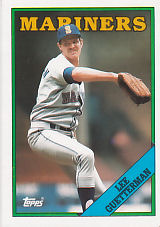 Lee Guetterman earned a Bachelor of Science degree in Physical Education while at Liberty Baptist College before making it to Major League Baseball.

A successful minor league pitcher, Lee was 5-1 with a 2.86 ERA before the Seattle Mariners called him up in 1987. He won his first five major league decisions in 1987, and by the All-Star break he was 8-1.

One of the more consistent relievers of his day, Guetterman started the 1989 season for the New York Yankees with a run of 30 2/3 innings without giving up a run - the highest total in 41 years. This streak was the longest ever by a reliever to start the season.

The two most similar players through 2013, according to the similarity scores method, are Morrie Martin and Ted Bowsfield.