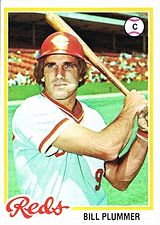 "I've always wondered how Bill would do if he played two months straight. He's a physical fitness nut, and if hard work means anything, he would do all right." - Pete Rose, July 1977

Bill Plummer's playing career lasted from 1965 to 1979, including 892 ML at-bats spread out over 10 seasons. He was a player/coach with the Spokane Indians in 1979. He was a back-up catcher during his playing days, serving as Johnny Bench's back-up with the Cincinnati Reds during the heyday of the Big Red Machine.

After being the Colorado Rockies' bullpen coach in 1993 and 1994, Plummer managed the Jacksonville Suns in the Detroit Tigers' chain in 1995 and part of 1996. Moving to the independent leagues, Plummer managed in the Western Baseball League from 1997 to 2001. He managed in the Arizona Diamondbacks' chain from 2002 to 2008 and in 2009 became the Diamondbacks' Minor League Catching Coordinator, a position he held through 2012 before returning to the dugout as a manager, a final season at the helm of the Visalia Rawhide in 2013. He resumed catching coordinator duties after the year until 2017, and currently works as hitting and catching coach for the summer league Redding Colt 45s.