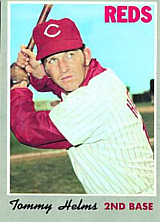 Tommy Helms, the 1966 National League Rookie of the Year, played 14 seasons in the majors, winning two Gold Gloves, appearing in two All-Star Games, and playing in the 1970 World Series. He is the uncle of Wes Helms.

Helms was born in Charlotte, NC and signed as a free agent with the Cincinnati Reds at age 18. He played in their minor league organization from 1959 to 1965, mostly as a shortstop. He hit .292 in the minors, getting as high as .340 for the Macon Peaches in 1962. He served in the U.S. Marines starting in October 1963.

Tommy had a brief cup of coffee (two games) in 1964, and then was up with the team for 21 games in 1965 - during which he hit .381. Tommy had a problem, in that the Reds' second baseman was Pete Rose, who was the same age as him. As a result, Helms made the team in 1966 as a third baseman, and won the Rookie of the Year Award. In 1967 manager Dave Bristol moved Rose to left field and Tommy became the second baseman.

While not a terrible hitter, Helms was not strong either: other than scoring 72 runs in 1966, he never scored as many as 50 in a season, and his high RBI mark was 61 in 1973. In the 1970 World Series, he batted seventh in the lineup. He was an outstanding defensive second baseman and was particularly good at turning the pivot on the double play. He was also a starter at a time when middle infielders were not expected to hit much, and his offensive contribution was quite correct for the period.

In a famous trade, the Reds moved him to the Houston Astros after the 1971 season in the big shakeup that brought Joe Morgan and Cesar Geronimo to Cincinnati and sent Lee May to Houston. Tommy hit relatively well in a pitchers' park in Houston from 1972 to 1975, playing as a regular during the first three years. In 1975, at age 34, he became the backup to Rob Andrews, a very similar player.

He finished out his major league career playing for the Pittsburgh Pirates in 1976 and 1977 and the Boston Red Sox in 1977. The 1976 Pirates used him mostly at third base, where Richie Hebner was the regular, while in 1977 he was mostly a pinch-hitter and designated hitter.

After his playing career ended, he was inducted into the Cincinnati Reds Hall of Fame in 1979. Tommy was a Texas Rangers coach in 1981 and 1982. He was a member of the Cincinnati Reds coaching staff from 1983 to 1989, replacing Pete Rose as manager while he was suspended in 1988 and after he was banned from baseball in 1989. Helms' last managerial gig was two seasons at the helm of the Atlantic City Surf in the Atlantic League from 2000 to 2001.

Tommy's sons, Ryan and Tommy Jr., each spent time in the minor leagues. Helms and Pete Whisenant, who also played for the Reds, owned a vending machine business in North Carolina for a while after their playing days. His first baseball card appearance was in the 1965 Topps set.