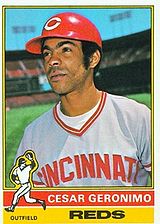 Cesar Geronimo played the heart of his 15-year major league career with the Cincinnati Reds, and was the regular center fielder for the Big Red Machine. He won four Gold Gloves. 5 of his 14 World Series hits went for extra bases, including two home runs. He was also a tremendous defensive outfielder, something which motivated Reds manager Sparky Anderson to keep him in the line-up even if his offensive production left something to be desired: he had plenty of offensive weapons at his disposal, and could afford to carry a glove-first outfielder. Indeed, he won four Gold Gloves during his career.

He was the 3,000th strikeout victim for Hall of Famers Bob Gibson *AND* Nolan Ryan.

He was originally destined to be a catholic priest, as his parents had enrolled him in a prestigious seminary school in the capital, Santo Domingo. However, his athletic talent determined another destiny for him.

Gerónimo was later a Latin American crosschecker for the Cleveland Indians. In July 2008, he was inducted into the Cincinnati Reds Hall of Fame.