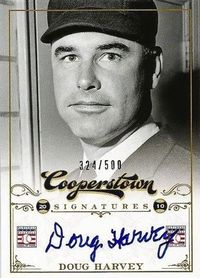 Note: This page links to Doug Harvey, the former umpire. For the NHL Hall of Fame defenseman who played in the minors from 1947 to 1950, click here.

Inducted into Hall of Fame in 2010

When Doug Harvey retired in 1992, he was the longest serving umpire since Bill Klem. Harvey began his career at 19 in the Sunset League, then worked amateur and semi-pro games around San Diego, CA until joining the California League in 1958. That made him one of the last professional umpires to have been hired without attending an umpiring school. He worked in the Pacific Coast League in 1961 before being called up to the majors in 1962.

During his major league career, Harvey worked over 4,500 National League games. He was in nine League Championship Series, five World Series, and six All-Star Games. He was the home plate umpire at the 1982 All-Star Game and again in 1992, an honor for his 31 seasons as an umpire. He gained the nickname "God" as a result of his actions on the field. He had an encyclopedic knowledge of the rules of the game. During his umpiring career he spent over a decade on the same umpiring crew as Shag Crawford and later with his son Jerry Crawford.

In 1997, throat cancer caused by smokeless tobacco turned Harvey into an active campaigner against the substance. After that, he gave hundreds of talks about the dangers of chew.

Doug Harvey led the composite ballot in the 2007 Veterans Committee election to the Hall of Fame but he fell short of the required 75% for election. He was elected to the Hall on December 7, 2009, receiving 15 of 16 votes and was inducted in 2010. He was the first umpire inducted in 11 years, since Nestor Chylak in 1999. He died in 2018 and that season, major league umpires wore a patch with his initials, DH, in his honor.