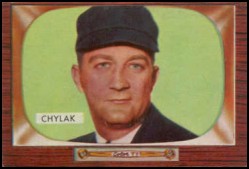 "Nestor is one of the ultra, ultra good umpires. And the players respond to him. He's a good hustler. He always seems to be at the right place at the right time." — Johnny Pesky

Neston Chylak was a longtime American League umpire. He began his minor league career in the PONY League in 1947-1948. He moved up to the Canadian-American League in 1949, the Eastern League in 1950-1951, and the International League 1952-1953. His big league career began in 1954 and he remained in blue through the 1978 season. After that, he served as an assistant supervisor of umpires until his death of a heart attack at age 59.

He is perhaps the only umpire who ever managed to look jaunty in his umpire's get-up.

He served in the Army in World War II, and nearly lost his eyesight in the Battle of the Bulge after being struck by shrapnel from an exploding shell. After the war, he umpired in amateur ball and then in the minor leagues before coming to the majors.

He was the umpire who declared a forfeit on the notorious "Ten-Cent Beer Night" in Cleveland, OH in 1974, when the fans got rowdy and stormed the field in the 9th inning.

"Few have ever been more respected in his field. Everyone looked up to him, and I developed more respect every time I saw him in a World Series or All-Star Game." - Bowie Kuhn