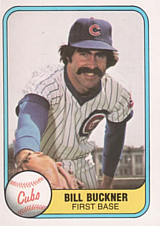 "In Vero Beach, Florida, home of the Dodgers spring training, Lasorda was raving over Monday, who was roping balls left and right. Lord knows Bill Buckner was not going to be made a fool of by his replacement. He played in 122 games with the Cubs in 1977, a feat that deserves to be immortalized in the Courage Hall of Fame. He hit .284, drove in 60 runs and stole 7 bases -- with a pronounced limp that only got worse as the summer turned to fall. In late August the Dodgers went to Wrigley Field for a series that meant little to the floundering Cubs and everything to Buckner. In the first game, a 6-2 Chicago triumph, Buckner drove in 5 runs with 2 homers and a pair of singles. The next day he had 3 more hits and a home run in another win. 'Buckner was pretty tough on his daddy,' Chicago manager Herman Franks said with a chuckle in reference to Lasorda. 'The guy's one feisty SOB'" - Jeff Pearlman, The Bad Guys Won 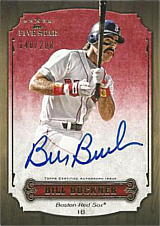 Bill Buckner played in the majors in four decades and was one of baseball's better hitters of the late 1970s and early 1980s, winning the 1980 National League batting title. He will forever be known, unfortunately, for making an infamous error in the 1986 World Series.

Buckner was traded prior to the 1977 season to the Chicago Cubs in a deal for L.A. to nab Rick Monday. No longer patrolling the outfield, Buck became primarily a first baseman. He played with the Cubs for more than eight seasons and hit over .300 four times, including a league-leading .324 in 1980. Although he hit .311 with a league-leading 35 doubles in 1981, the Cubs that year were the butt of many jokes for their poor performance. The Cubs went on to win the division in 1984, but Buckner was traded to the Boston Red Sox early that season. He played two full years with Boston, driving in 100-plus runs each time. Buckner set a record for a major league first baseman with 184 assists in 1985. The record stood for 24 years until broken by Albert Pujols. But his tenure with the Red Sox will be forever remembered for famously letting Mookie Wilson's ground ball trickle through his legs in the 11th inning of Game 6 of the 1986 World Series. Like Fred Merkle, Buckner was a good ballplayer unfairly remembered for a single error. He closed out his career with the California Angels, Kansas City Royals, and a brief stint at age 40 with the Red Sox again.

In his 22 seasons, Buckner accumulated 2,715 hits but appeared in the All-Star Game only once, in 1981. His highest finish in the MVP vote was tenth (which he did two times). He finished in the top ten in batting six times and was twice third in the league in RBI. He led the league in doubles twice (1981 and 1983 with the Cubbies) and singles once. He was not a big walker, usually drawing 25-30 in a season, and was a moderate home run hitter, with his highest total being 18 in 1986. He was a line-drive hitter, whose power manifested itself chiefly in doubles hit to gaps in the outfield. For his career, he racked up 498 two-base hits. Eligible for the Hall of Fame in 1996, he received 2% of the vote and was dropped from the ballot. 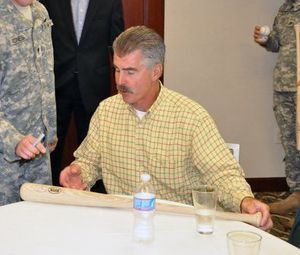 After his playing days, Buckner was a Chicago White Sox coach in 1996 and 1997. On April 8, 2008, he was invited back to Fenway Park to throw out a ceremonial first pitch to former teammate Dwight Evans. The Red Sox faithful responded by giving him a two-minute standing ovation, proving a little bit of time heals all wounds. In 2011, Bill returned to the Boston area as manager of the independent Brockton Rox of the Can-Am Association. In 2012, he was hired by the Chicago Cubs to be hitting coach for the Boise Hawks, a role he returned to for 2013 before retiring. In 2008, he was inducted into the Baseball Reliquary's Shrine of the Eternals.

Away from baseball, Buckner was featured in an episode of Curb Your Enthusiasm in 2011, catching a baby falling from a burning building. He was also on an episode of the short-lived NBC sitcom Inside Schwartz and the 2008 film The Comebacks.

Buckner suffered from Lewy Body Dementia, and passed away at the age of 69 on the morning of May 27, 2019. He was survived by his wife, Jody, and three children, Brittany, Christen and Bobby, who played baseball at the collegiate level. Two of his brothers had played minor league baseball. Jim Buckner played outfield from 1972 to 1981 and Bob Buckner played infield from 1966 to 1970, scouting for the Chicago Cubs from 1977 to 1979. Bill's cousin, Matt Carson, played parts of four seasons in the majors and another cousin, Clayton Carson, coached in college.