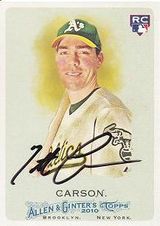 For 2009, he signed as a seven-year minor league free agent with the Oakland Athletics and found himself with the Sacramento RiverCats. He had a career year, hitting .264 with 25 home runs and 77 RBI, and was subsequently called up to the majors, replacing pitcher Vin Mazzaro, who was placed on the 60-day disabled list. Carson made his debut on September 18, 2009, against the Cleveland Indians. In his first game, he struck out twice in three at-bats. He collected hits in his next three games, including his first home run against Eddie Guardado of the Texas Rangers, after he came into the game as a defensive replacement on September 21. He hit .286 in 10 games that first year. He was back with the A's for 36 games in 2010, but things did not go as well; he hit only .177, although he did slug 2 doubles and 4 homers in 79 at-bats. He saw brief action with the Minnesota Twins in 2012, then hit 7-for-11 (.636) with a home run and 5 runs scored in 20 games for the Cleveland Indians in 2013, his last big league action.