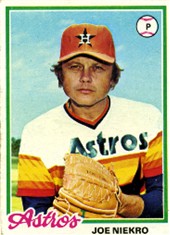 Joe Niekro was part of the fabric of Major League Baseball for a very long time. He pitched from 1967 to 1988 (22 seasons), notching 221 wins. He was also one of the most successful knuckleball pitchers of his era.

He originally came up with the Chicago Cubs, just as they were starting to become good. After a promising 10-7, 3.34 season as a rookie in 1967, he was the team's Opening Day pitcher in 1968. He went 14-10 that season, but his ERA ballooned to 4.32 - a full run above league average, and he became expendable.

In the first weeks of the Cubs' infamous 1969 season, he was traded to the expansion San Diego Padres for pitcher Dick Selma. He went 8-17, 3.70 for his new team, being a victim of poor run support as three of his wins were shutouts. He was traded once again after the season, to the Detroit Tigers, where he was a member of the starting rotation in 1970 before falling into gradual disuse over the next two years.

The Tigers placed him on waivers in August 1973, after he had spent the entire season in the minor leagues up to that point; he was selected by the pitching-depleted Atlanta Braves, where he joined his older brother, future Hall of Famer Phil Niekro, for the remainder of the year. He stayed with the team in 1974, pitching out of the bullpen. It is in Atlanta he started working seriously on the knuckleball which his father had taught him and his older brother was using with great success. Mastering the pitch would lead to the most successful seasons of his career.

Joe Niekro is mostly remembered for his days with the Houston Astros, whom he joined at the age of 30 at the beginning of the 1975 season after being purchased from the Braves. More than half of his career innings and wins came with the Astros.

In his first two seasons in Houston, he continued in the role he had with the Braves, swingman, alternating between long relief and an occasional start, without distinguishing himself in any particular way. This changed in 1977 when he was inserted in the starting rotation and went 13-8 with a 3.04 ERA. He would remain in the Astros' rotation until late 1985, becoming one of the team's best-ever pitchers over the period. He notched 20+ victories two times during that span, when he was 34 and 35 years old in 1979 and 1980. In 1979, he finished second to Bruce Sutter in the Cy Young Award vote after leading the National League in pitcher wins and shutouts. He got his first taste of postseason action in 1980, pitching 10 scoreless innings with a no-decision in a start against the Philadelphia Phillies in the NLCS. He was largely responsible for bringing the Astros to the playoffs for the first time in their history, as he started and won the one-game playoff with the Los Angeles Dodgers on October 6th, made necessary by both teams finishing the season with identical records of 92-70.

He returned to the postseason in 1981, after a strike-shortened 9-9 season, and once again pitched shutout ball, this time for seven innings, in a start against the Dodgers in the Division Series; as was the case the previous year, he ended up with a no decision and the Astros lost the series.

He was traded to the New York Yankees in September 1985 and went 2-1 in three starts as the Yankees finished behind the Toronto Blue Jays in the pennant race. He spent the 1986 season in the Yankees' starting rotation, going 9-10 with a 4.87 ERA, with the highlight being a combined one-hitter of the California Angels on June 4.

On June 7, 1987 he was traded to the Minnesota Twins for back-up catcher Mark Salas. The Twins were desperate for starters to shore up the rotation behind their two stars, Frank Viola and Bert Blyleven; the 42-year-old Niekro started 18 games for them the rest of the way, with an uninspiring 4-9 record and 6.26 ERA. On August 3rd, he was caught on the mound with a nail file in his back pocket and suspended for 10 games under accusations of doctoring the baseball. On August 15th, he appeared on Late Night With David Letterman mocking the incident, wearing a carpenter's apron and carrying a power sander. The Twins did manage to win their division, but Niekro was dropped from the starting rotation for the playoffs, in favor of rookie Les Straker. He did not pitch in the ALCS but made his only World Series appearance that year with two innings of scoreless relief against the St. Louis Cardinals as the Twins won the Series in seven games. That brought his career postseason record to 20 innings pitched without allowing a single earned run.

Niekro was pitching coach of the Bend Rockies in 1992. He was then a coach for the Colorado Silver Bullets under his brother.

Joe Niekro's son Lance Niekro played in the major leagues as a first baseman; another son, J.J. Niekro, a conventional pitcher, began playing in the Braves' system in 2021. Joe and Phil Niekro hold the record for most wins by two brothers with 539 - 221 by Joe and 318 by Phil. Joe died of a brain aneurysm in 2006. His daughter, Natalie, created the Joe Niekro Foundation in his honor, supporting those affected and to help boost awareness and treatment for brain aneurysms, AVMs and hemorrhagic strokes.