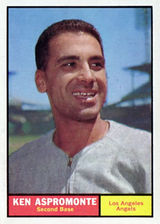 Ken Aspromonte spent his seven-year major league career as a utility infielder, except for one season when he played regularly for the Cleveland Indians in 1960, hitting a solid .288. He is the older brother of former major league infielder Bob Aspromonte and younger brother of minor leaguer Charles Aspromonte. Primarily a second baseman, Ken was also with the Los Angeles Angels, Milwaukee Braves, and Chicago Cubs, leaving the majors in 1963 with a lifetime .249 mark.

Ken began working his way through the Boston Red Sox farm system in 1950. He served in the U.S. Army for 22 months during the Korean War and did radio broadcasting at SHAPE headquarters in Paris, France. After two years in the military, he returned to baseball. He was the Pacific Coast League batting champion in 1957, with a .334 average in helping the San Francisco Seals to the pennant in their last year before the New York Giants came to the west coast. He had a trial with the Red Sox late in that season, but was traded to the Washington Senators the following year, with Cleveland to follow.

Out of the majors after the 1963 season, he went abroad to play in Japan. Aspromonte then hit .273/.323/.432 playing for the Chunichi Dragons and Taiyo Whales from 1964 to 1966. Ken then returned to the US to manage in the minors. Over four years managing in the Cleveland Indians farm system between 1968 and 1971, his teams compiled a record of 238-242. His 1968 GCL Indians team finished 3rd; the AA Reno Silver Sox finished tied for third place in the 1969 California League. His last minor league assignment was for two years with the Tribe's AAA entry in the American Association, the Wichita Aeros. The Aeros finished in 8th place in 1970 and moved up to 6th place in 1971. He was then hired to manage the Cleveland Indians, leading them to fifth, sixth and fourth place finishes from 1972 to 1974 in the American League East Division.

Like his brother Bob, Ken moved to Houston where he also had a distributorship for Coors Beer.