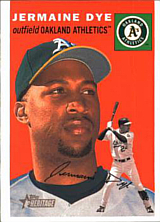 An example of how a player's fortunes can change, Jermaine Dye was a star with the Kansas City Royals, then disliked by many while with the Oakland Athletics because he didn't produce up to expectations, and then a star again with the Chicago White Sox.

Dye was drafted by the Atlanta Braves in the 17th round of the 1993 amateur draft. This was an oddly prolific 17th round draft class. Typically, very few, if any players from the 17th round will make the big leagues. However, the 1993 17th round produced four major leaguers, including Glendon Rusch and Danny Kolb, both of whom had lengthy careers as pitchers.

Dye broke into the majors as a 22-year-old rookie with the Braves in 1996 and played in the 1996 World Series. He was traded before the 1997 season to the Royals, where he spent 4 1/2 seasons and became a star. He drove in 100+ runs for them twice (and also drove in more than 100 runs in 2001, when he was traded mid-season). He struggled with lower production and injuries in his 3 1/2 seasons in Oakland. He became a free agent after the 2004 campaign, and during the offseason, he came to an oral understanding with the White Sox. He then received a higher offer from another team, but chose to honor the deal he had struck with the Sox.

As the White Sox's regular right fielder in 2005, Dye hit .274 with 31 home runs but had an even greater impact as a hero of the 2005 World Series. He drove in the first Sox run in the Series and also drove in the team's last run, a game-winning single in the 8th inning of Game 4 to give the club a sweep. He had his best major league season the next year, hitting .315 with 44 homers and 120 RBI and finished fifth in the MVP voting. However, he fell off in 2007, hitting just .214 in the first half before rebounding a bit to finish the year with a .258 average and 28 home runs.

On April 13, 2009, Dye and Paul Konerko hit their 300th homers in the majors, the first teammates to do so in the same game. They managed the feat in back-to-back at-bats. His $12 million mutual option with the Sox was bought out after the season and he announced his retirement in 2011.