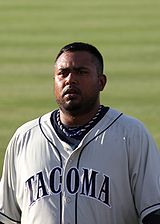 Luis Jimenez played 10 seasons in the minor leagues and one in Japan (through 2009). He has led two minor leagues in slugging percentage.

Jimenez moved to the Baltimore Orioles system in 2002 and hit .375/.474/.597 as a 1B-OF for the Bluefield Orioles, emerging as an offensive threat. He led the Appalachian League in average and slugging. He was named to the league All-Star team at DH but lost Player of the Year honors to home run king Wes Bankston. In 2003, Luis hit .244/.349/.315 for the Aberdeen Ironbirds, ending his time in Baltimore's chain.

Baltimore brought Jimenez back into their chain and he hit .328/.399/.581 with 22 homers and 79 RBI in 90 games for the Bowie Baysox for the remainder of 2007. Despite only playing part of the year in the Eastern League, he was only six home runs behind league leader Jeff Larish. Jimenez paced the circuit in slugging. Although he joined the Orioles organization partway through the year, he tied Oscar Salazar for the most homers by a Baltimore farmhand in 2007. His 11 errors tied Josh Whitesell for the most by a EL first sacker.

Jimenez's next stop came in Japan, signing with the Nippon Ham Fighters for 2009. Batting sixth and playing first base on Opening Day, he went 0 for 4. The next day, he homered off Marcus Gwyn for his first hit in Nippon Pro Baseball but things went downhill from there. He only hit .231/.268/.397 with 5 homers in 39 games, earning him his release. Shinji Takahashi took over at first base after Jimenez was waived.

He had a fine winter with his hometown Cardenales de Lara (.326/.426/.560, 26 BB, 9 HR, 43 RBI in 39 G), 6th in slugging in the Venezuelan Winter League and tying Tom Evans for 4th in RBI. He still drew no interest from MLB or NPB teams for the 2010 summer. He was thus available for the Venezuelan national team in the 2010 Central American and Caribbean Games, in which he went 5 for 18 with 5 walks, 5 runs and four RBI as Venezuela's starting first baseman, homering against the Virgin Islands.