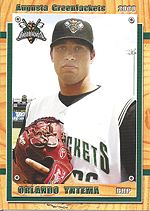 Yntema signed with Sicily's Catania Warriors Paternò for 2010. As his father was Dutch, he counted as European and thus did not take up a foreign player slot. He debuted on April 4 with a fine start against Danesi Nettuno, with 4 hits and 2 runs in eight innings (though he walked seven and only fanned two) to pick up the victory, Catania's first of 2010. For the season, he struggled at 3-9, 4.67 with 49 walks in 81 innings.

Yntema pitched for the Dutch national team in the 2010 Intercontinental Cup, then signed with UVV in the Netherlands for 2011. As UVV's Opening Day starter on April 14, he lost a 10-4 decision to the Pioniers. He allowed nine hits and six runs (two earned) in 6 innings in a loss to Conrad Orman.